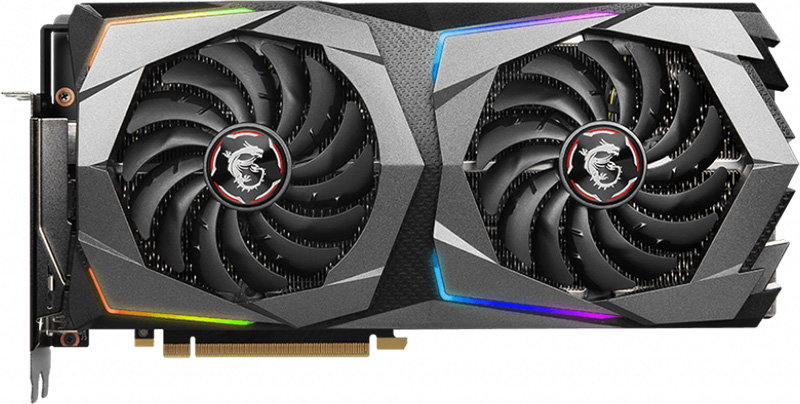 The new RTX 2070 Super features a new GPU, it’s a derivative of NVIDIA’s TU104 GPU chip. It features 40 Streaming Multiprocessors, 2560 CUDA cores, 320 Tensor cores and 40 RT cores. The specs are basically a bit higher than its predecessor the RTX 2070. The RTX 2070 Super is also targeted towards 1440p gaming and/or with a high refresh rate monitor. According to NVIDIA the RTX 2070 SUPER is faster than the former flagship GeForce GTX 1080 Ti GPU, and it is also up to 24% faster (16% average) overall than the standard GeForce RTX 2070 at 2560×1440 resolution. We will find out later in this review if those claims are true.

What is more interesting is that NVIDIA decided not to increase the price or base price of the RTX 2070 Super, still at $499, despite of the increased specs and performance. It basically replaces its predecessor on the same price range; and no price premium for the Founders Edition as well. AMD’s RX 5700 XT starts at $399 USD, same price with the RTX 2060 Super. But when we reviewed the RX 5700 XT, we found that the RX 5700 XT is faster than an RTX 2060 Super. It’s going to be a stiff competition in the mid-range graphics card market this time.

Going back to MSI’s GeForce RTX 2070 Super Gaming X variant, this graphics card features a higher boost clock speed of 1800 MHz and it’s built with MSI’s Twin Frozr 7 thermal design. In our previous reviews, I am quite impressed with the thermal performance and acoustics of the Twin Frozr 7 design. It’s well built, pretty solid, runs cool and quiet; and let’s not forget the RGB lighting.

Below are specs of the 2070 Super Gaming X, a reference RTX 2070 Super and their predecessors. Then let’s take a closer look on the graphics card itself. 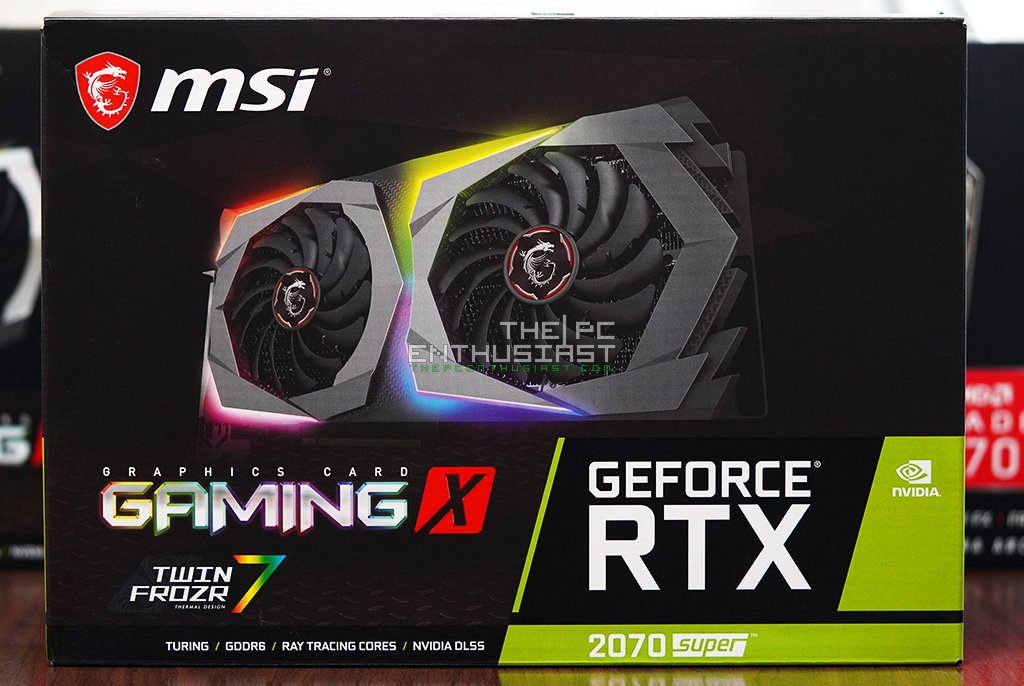 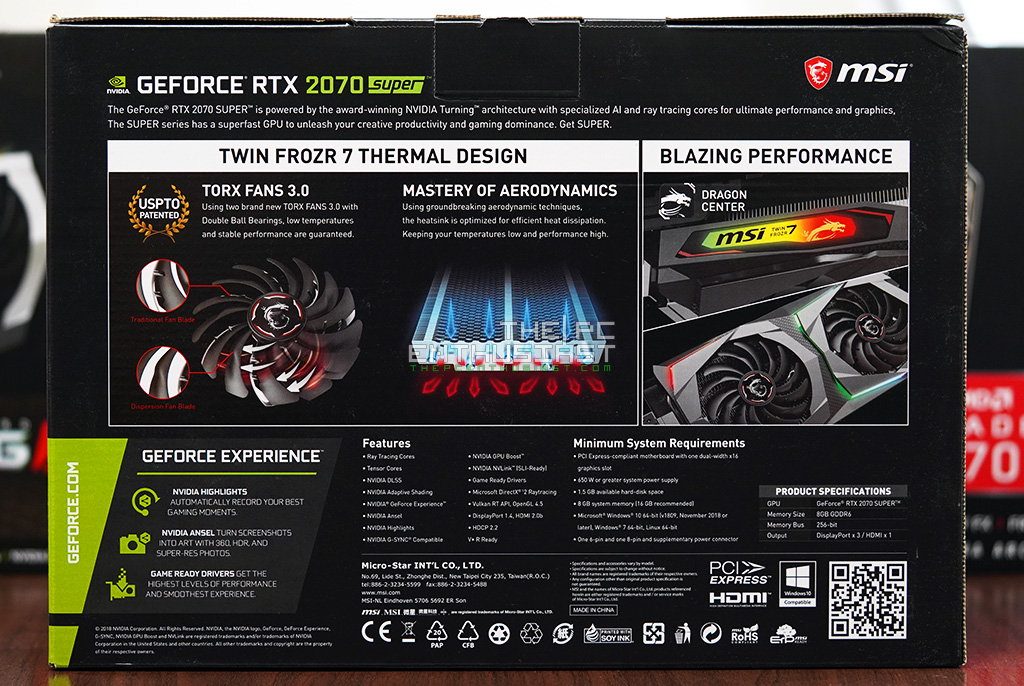 The MSI RTX 2070 Super Gaming X comes in a sturdy and slightly larger box than the RTX 2060 Super Gaming X. The box art is very familiar, all Gaming X variant have the same box art. You can see a picture of the graphics card on the front portion of the box and the name “2070 Super” at the bottom portion. At the back you can see the highlighted features of the Twin Frozr 7 thermal design and gives you some information why this thermal design is unique and special compared to other cooler design. 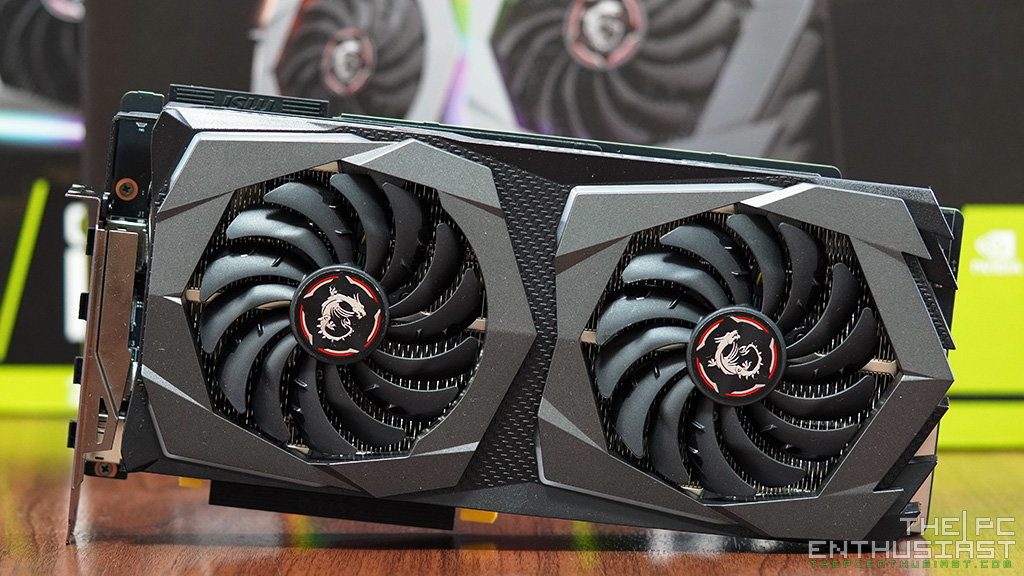 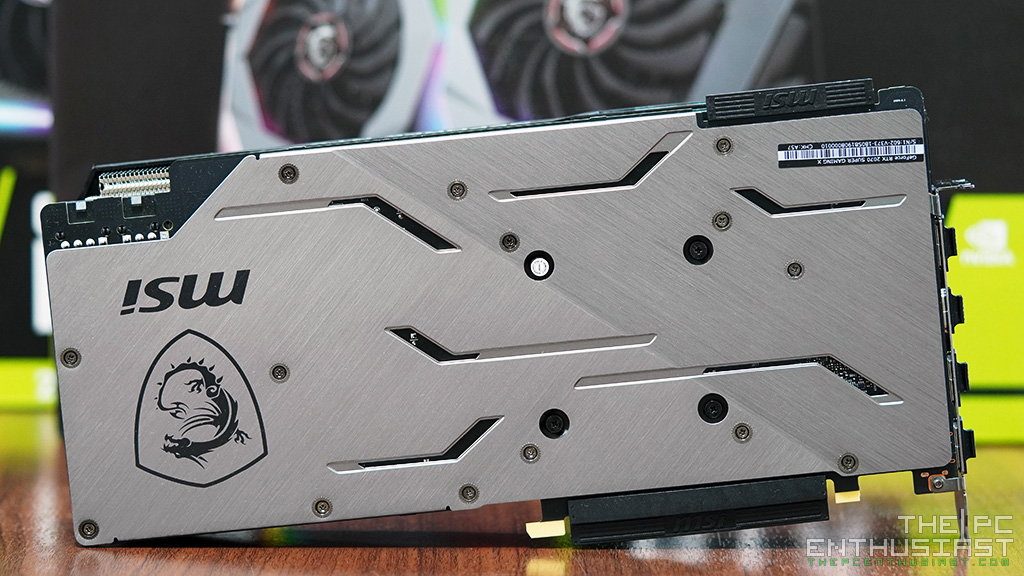 Above you can see the front and back view of the RTX 2070 Super Gaming X. The cooler shroud is made of plastic, but the back plate is metal. The design is a little bit aggressive with its gaming-esque look, but generally the color scheme is a bit neutral and should blend well in any gaming system. To be specific, it’s a mixture of black and gunmetal grey; and the back plate is metal with aluminum-brushed finish and some cutouts.

You can also see the two Torx Fan 3.0 on the cooler shroud. These fans feature a special curve that accelerates the airflow. The Gaming X also features Zero Frozr, meaning the fans will stop spinning when temperature is below 60° Celsius. The graphics itself is quite large and heavy, at 297mm x 143mm x 56mm and 1.4Kg. There is a support bracket included to prevent the graphics card from sagging. 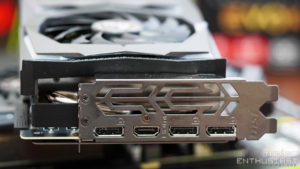 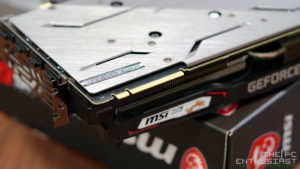 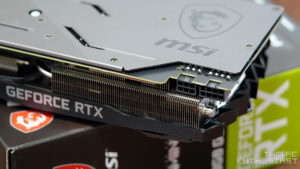 At the output ports, the 2070S Gaming X has three DisplayPorts 1.4 and an HDMI 2.0b.  There is no USB Type-C connector here for VR headsets. The NVLink connector is protected by a rubber cover and it draws power from an 6+8 pin power connector. MSI recommends that you use at least a 650W power supply. We recommend that you use an 80 Plus certified power supply, a good and reliable one to protect your system’s components. 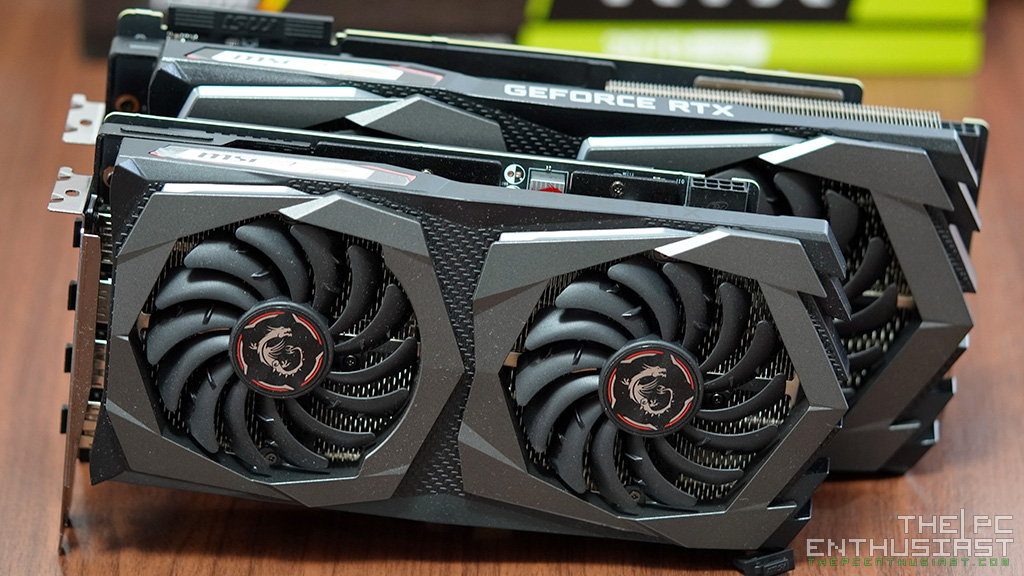 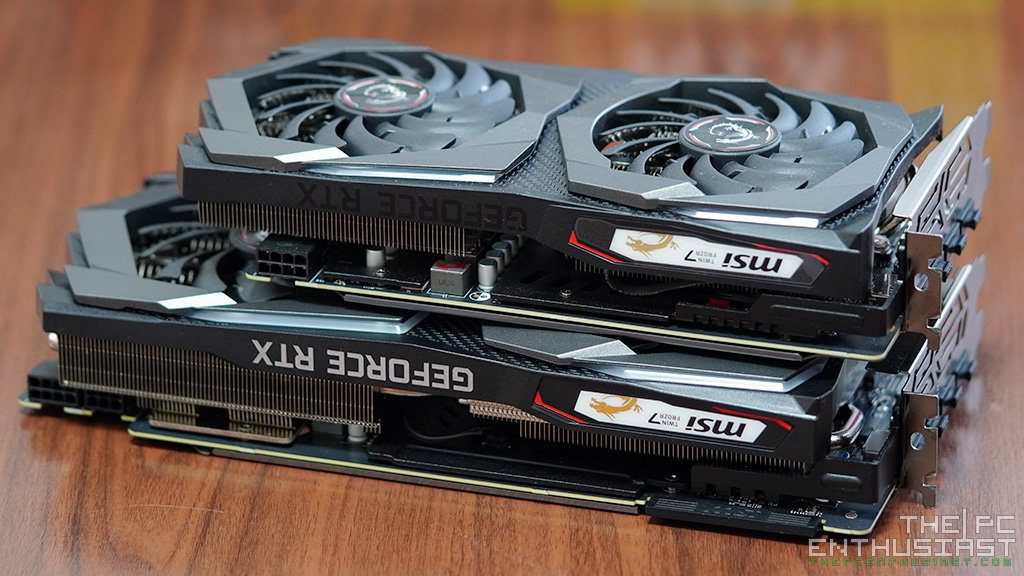 The RTX 2070S Gaming X has 5 layers in total: the cooler shroud, the chunky aluminum heat sink with wave-curved fins, another layer of metal plate that add support, the custom PCB and the metal back plate. According to MSI, they are using a “premium thermal compound X” between the graphics card’s GPU and GPU base plate. 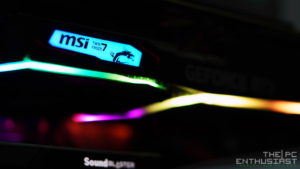 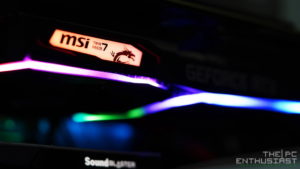 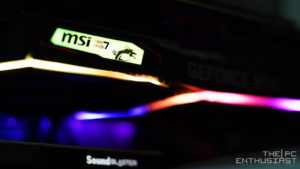 Finally, let’s not forget the RGB Mystic lighting. You can customize the colors and the LED effects and synchronize it with the look and feel with the other components that are compatible with Mystic Light as well. The lighting effect can be controlled using MSI’s Dragon Center.

Let’s proceed to the next page for the test setup, noise and temperature of this graphics card.