NVIDIA has just released the new GeForce RTX 2070 SUPER and RTX 2060 SUPER graphics cards, with the RTX 2080 SUPER to be released on a later date. If you’re updated with the latest news, this is no longer a surprise, since information has been leaked on the web regarding the SUPER graphics cards several days ago. The new GeForce RTX 20 Series SUPER cards doesn’t really offer anything new in the table. Except that they are merely a “SUPER” or bumped up specs version of their predecessors. TL;DR, the new RTX 2070 SUPER now performs somewhat on par with the RTX 2080, and the RTX 2060 SUPER performs almost on par with the RTX 2070. Why not call them Ti? Well, I don’t know. Perhaps “SUPER” sounds better than “Ti”? And besides, the “Ti” suffix has been around for many (many) years and it’s already an overused suffix. Go ahead and check out more details regarding their specs and some benchmarks below. Let’s talks about the GeForce RTX 2060 SUPER first. It’s based on the TU106 GPU, and comes with the same features that are available on the existing RTX 2060 like ray tracing and AI-enhance graphics. The core count has been increased in the RTX 2060 SUPER, memory bus has been expanded, and now has 8GB of GDDR6 memory. Like I said, we don’t have any samples yet, unfortunately. But theoretically, if NVIDIA’s claimed performance is true; that’s how I see things and I expect those kind of performance numbers from these new SUPER graphics cards. 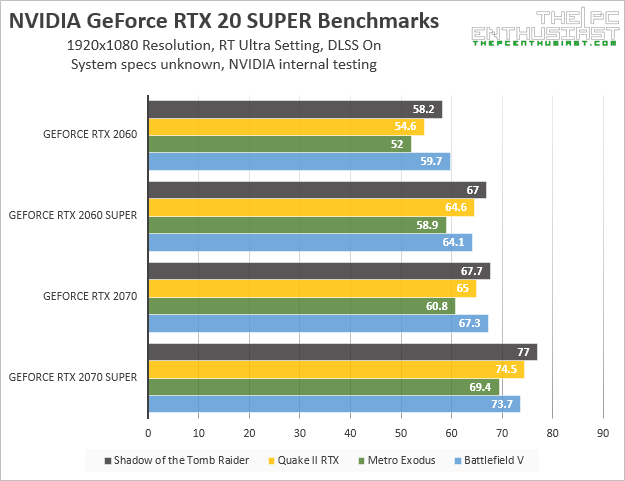 Clearly, NVIDIA is trying to disrupt AMD’s release of their NAVI graphics cards – the Radeon RX 5700 XT and RX 5700, due to be officially released this July 7. AMD doesn’t have anything to offer that will compete with anything above RTX 2080 level. The RX 5700 XT and RX 5700 were designed to compete with NVIDIA RTX 2070 and RTX 2060 graphics cards. It looks like it’s not looking good for the red team with the SUPER cards at this point. Let’s just wait and see, after all, most people will buy based on price / performance.