NZXT has recently introduced a Liquid Cooling solution for graphics cards – the NZXT Kraken G10. Just like its cousins Kraken X40 and X60, the Kraken G10 uses a similar water block, pump, tubing and a radiator. I first saw the Kraken G10 when NZXT first showcased the Source 530 in one of its product pictures. I’m pretty sure they leaked it accidentally before they released its official announcement. Anyway, check out more details about the Kraken G10 below. 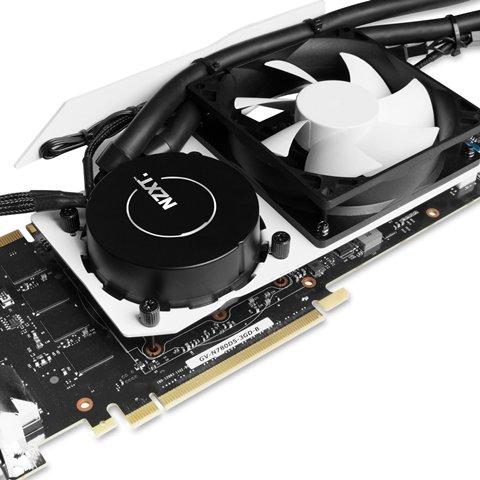 The NZXT Kraken G10 is made entirely of steel, and its bracket lets users mount NZXT Kraken coolers as well as many non-NZXT liquid coolers to their GPUs with ease. Included with the bracket is a 92mm fan used to cool video card components. NZXT claims that the Kraken G10 offers 40% more cooling than stock coolers, a level of performance only previously achievable with a costly custom liquid-cooled setup. Combine this with Nvidia’s GPU Boost 2.0 or AMD’s PowerTune, and new video cards can perform cooler and faster than before. The Kraken G10 also features zip-tie points to hide tubing behind its slick exterior to ensure the video card looks just as amazing as it performs. The mount in the kit comes in black, white or red.

The compatibility list is based on AMD Radeon and NVIDIA’s reference board layout only. Please check the height restriction before purchase.
*Based on reference design screw spacing and die height.

The NZXT Kraken G10 will hit shelves in the following days or weeks to come depending on the region. It has a manufacturer’s suggested retail price of $29.99 USD and comes inblack, white or red colors. Surprisingly the Kraken G10 is way cheaper compared to the Kraken X40 CPU cooler.

I think that if the Kraken G10 becomes a hit, they might release a new model with 240 or 280 radiators. Honestly a 120 or 140 radiator might not be enough since GPU’s tend to get really hot specially when overclocked. By the way, NZXT warns that removing your current graphics card’s cooler, whether it’s a custom or the stock CPU cooler may void your graphics card’s warranty. So be sure you know that you are doing.