The first T7 portable SSD was released in Q2 2020, called the T7 Touch. Later in the same year, Samsung released a non-Touch variant or a T7 without the fingerprint sensor. Both drives feature a small and compact design, offering speeds of up to 1,050MB/s sequential transfer speed.

Fast forward to today, after two years, Samsung decided to release a new variant of the T7 portable SSD. This time it’s called the T7 Shield. As you might have guessed based on its name, the T7 Shield features a rugged design and construction. The T7 Shield doesn’t have a fingerprint sensor, but it is IP65-certified as dustproof and water-resistant. It’s also shock-resistant from drops of up to three meters.

Aside from its toughness and durability, it also offers wide compatibility and strong security. The T7 Shield is compatible with PC, Mac, Android smartphones, and even some game consoles. It also offers 256-bit AES hardware encryption.

Below are the rest of its specifications, and after that, let’s take a closer look at the drive and see how it performs.

The T7 Shield came with a small rectangular box. The retail box is color blue since the unit that I have here is also blue. If you opt for the Beige or Black variant, the box color will be similar to the unit’s color. Samsung mentioned that the T7 Shield “uses one-third of the tray packaging compared to prior generations while minimizing greenhouse gas emissions during its production through production efficiencies”.

The package includes an installation guide and warranty statement, and two types of cables. There is a USB Type-A to Type-C cable and a USB-C to USB-C cable.

The T7 Shield measures 3.5″ x 2.3″ x 0.5″ inches or 88mm x 59mm x 13mm, and weighs 98 grams. It’s just slightly larger than a credit/debit card. Almost its entire surface is covered or wrapped by a rubber material. It’s non-slip, and easy to grip, but I notice that it attracts dust and lint easily.

On one side of the T7 Shield, you can see the USB-C port and activity LED indicator right beside it. On the opposite side is some additional information regarding the portable SSD.

Remember, the Samsung T7 Shield is only dust and water-resistant. It is NOT waterproof. So, do not try to submerge the drive underwater. Now, let’s see how it performs.

In testing the Samsung T7 Shield portable SSD; I am using a Z690 motherboard powered with a 12th gen. Intel Alder Lake CPU. The motherboard has a dedicated USB-C 10Gbps port. However, I connected the drive to the Thunderbolt 4 (USB-C) port to avoid any potential bandwidth bottleneck. Below are the specifications of the system I used. 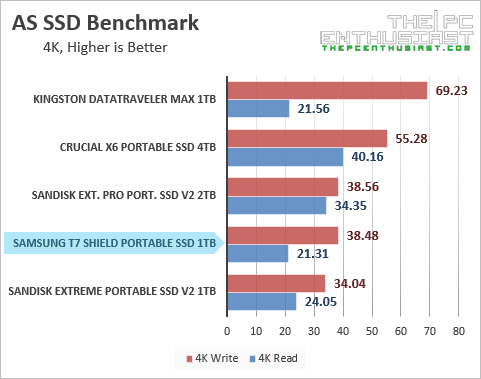 We can also see a similar result on the sequential test of AS SSD benchmark. Both the Samsung T7 Shield and SanDisk Extreme Portable SSD V2 have similar advertised sequential transfer speeds, about 10Gbps or around 1,000MB/s. As you can see from the results above, they perform similarly.

ATTO Disk benchmark reaffirms the T7 Shield’s sequential performance. It’s just a few MB/s away from the advertised 1,050MB/s read and 1,000MB/s write sequential speeds. However, just like in the AJA system test, I’m not sure how the Crucial X6 managed to get above 800MB/s transfer speed. Its advertised sequential speed is only up to 800MB/s. 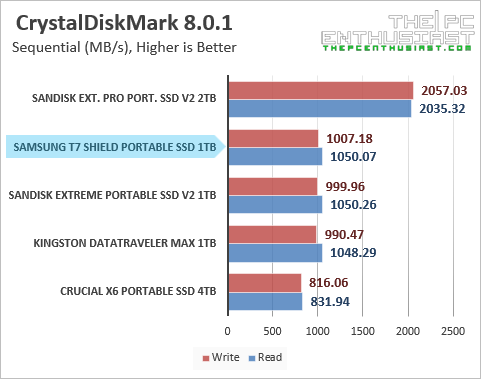 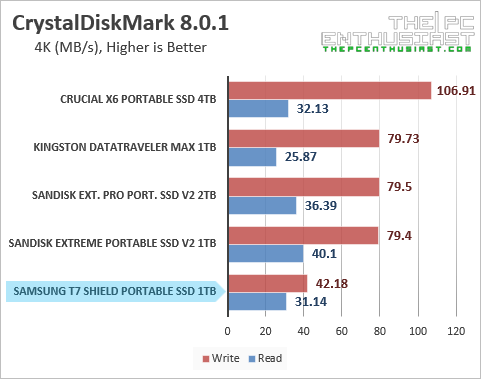 In CrystalDiskMark sequential test, we can see that the T7 Shield hit the advertised speed finally. It also performed similarly to the other portable SSD with a 10Gbps-limit interface. However, I noticed that the drive is struggling a bit when it comes to random read and writes workloads in this test.

What does it mean if a drive does not perform well in random workloads? This means reading and/or writing on the drive simultaneously with different file types (compressed / uncompressed), or executing multiple read and/or write workloads in parallel will take more time to complete.

If you’re primarily dealing with photos or video files, this shouldn’t be an issue at all. Just make sure that the drive is connected to at least a 10Gbps USB-C port to avoid any hiccups. And don’t initiate multiple copy or write workloads at the same time.

PCMark 10’s Data Drive benchmark is designed to test drives that are used for storing files rather than applications. You can also use this test with NAS drives, USB sticks, memory cards, and other external storage devices.

I’m a bit surprised that the SanDisk Extreme and Extreme Pro got somewhat similar results. On top of that, the non-Pro was a tiny bit faster in this test. Another thing that surprised me here is the Kingston DataTraveler Max. Unlike the other drives, the DataTraveler is a USB flash drive (stick) that plugs directly into the USB-C port. It has a different form factor and slightly slower sequential advertised speeds.

Last but not the least, I tested the Samsung T7 Shield using the PCMark 10 Full System drive benchmark suite. It is an intensive test and takes about an hour (or more) to finish. The test uses a wide-ranging set of real-world traces from popular applications (Adobe Creative Suite, Microsoft Office), and common tasks to fully test the performance of modern drives.

The Kingston DataTravel Max only has an advertised speed of 1,000MB/s read and 900MB/s write. And yet it outperformed the T7 Shield by a little bit in this test. Though, the T7 Shield was performing better on the other tests above.

The Crucial X6 Portable SSD is the “slowest” in the group, with up to 800MB/s. So, I am not surprised that it ended up at the bottom. Nevertheless, the X6 offers up to 4TB in capacity, an option that is not available on the other drives. And because of its capacity, I do use the Crucial X6 as one of my game drives.

The Samsung T7 Shield is now available in 1TB at $159.99 (MSRP) and 2TB at $289.99 (MSRP); and beige, black and blue colors. Samsung is also offering a three-year limited warranty. For the latest pricing and availability of Samsung’s T7 portable SSD series, kindly follow the links below: (#ad)

The Samsung T7 Shield portable SSD is a nice addition to the T7 family. It features hardware encryption, a rugged design and it’s IP65 certified. I guess dust and water resistance is its key selling point and not many drives offer this kind of protection. Thanks to its protection, this makes the T7 Shield an ideal drive for outdoor use.

However, when it comes to performance I am a little bit disappointed. While it did meet the advertised speed of around 1,000MB/s sequential read and write speed, I was expecting that Samsung would offer a faster 2,000MB/s transfer speed, like the SanDisk Extreme Pro portable SSD. This is a product released in 2022, two years after the T7 Touch and T7 portable SSD. I’m not sure why Samsung only released it now, with only the IP65 as its key advantage over the competition.

The Samsung T7 is the cheapest in the T7 family. But Crucial’s X6 and X8 portable SSDs are currently cheaper. The Crucial X6 and X8 are good options as well if you want to save a few bucks.

The T7 Touch is the more expensive variant due to it’s fingerprint sensor. The 2TB capacity is priced similarly with the faster SanDisk Extreme Pro Portable SSD at $280 USD. If you want security, go with the T7 Touch. But if you want speed, around 2,000MB/s, the Extreme Pro is the way to go.

Although I am a bit disappointed that Samsung didn’t release a faster 2,000MB/s portable SSD, at the end of the day the Samsung T7 Shield is priced competitively and it has its merits. If I am not mistaken, it is the only drive that offers IP65 dust and water resistance. SanDisk’s Extreme (Pro) portable SSDs are only IP55. I think the T7 Shield is more solid and can handle tougher environments.