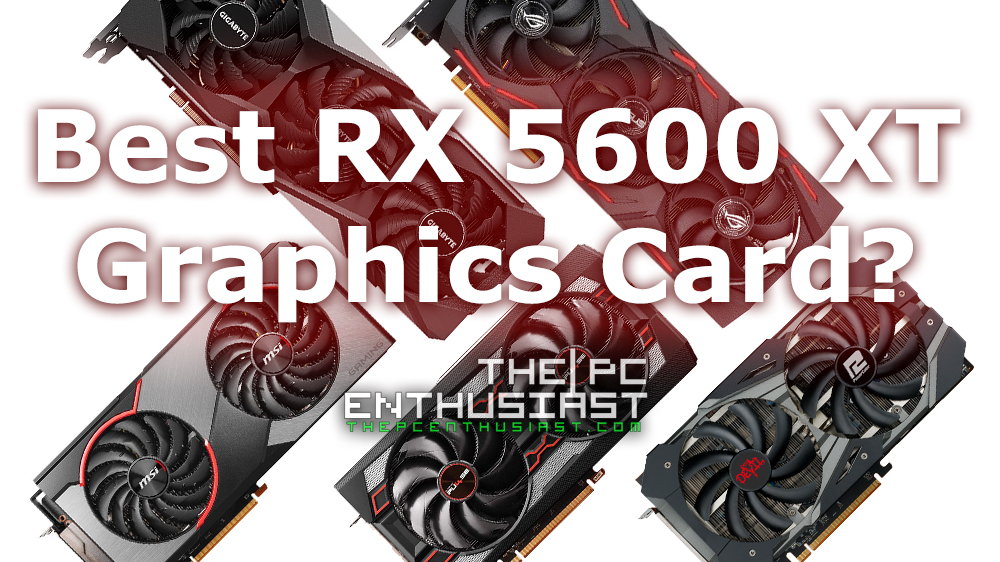 UPDATE: Aside from having a faster 14Gbps memory speed, we also noticed price adjustments on some of the RX 5600 XT. On top of that, AMD is also offering a free game bundle.

The Best RX 5600 XT Graphics Cards in the Market

AMD’s launch of the RX 5600 XT graphics card was a bit messy. AMD was abruptly forced to make some changes on their graphics card right before reviews went live. This is due to NVIDIA’s move to mark down the price of their RTX 2060 Founders Edition from $349, down to $299. EVGA also released a cheaper RTX 2060 to combat AMD’s RX 5600 XT in the form of EVGA RTX 2060 KO.

AMD did not make any price changes and stick with the $279 MSRP. Instead, the company decided to increase the performance of the RX 5600 XT through a BIOS update. Unfortunately, most of the RX 5600 XT graphics cards from the board partners are already in the warehouses or store shelves when this GPU first launched. As a result, those graphics cards have a slower clock speed and needed to have their BIOS updated to unlock faster performance.

Of course, after the initial batch of these RX 5600 XT, the newer ones are expected to come with the updated BIOS version right out of the box. So, if you ever bought an RX 5600 XT recently, be sure to check out the clock speeds and compare it with the specs from the manufacturer’s site.

UPDATE: Some of the RX 5600 XT cards with 12Gbps memory have already been updated by their respective manufacturers with 14Gbps memory speed. Still you may want to validate the graphics card just in case you got an old stock.

Like I said earlier, I updated this article since most of the RX 5600 XT are now updated with 14Gbps memory speed. Some of the cards we previously mentioned were not available, like Asus’ TOP and the MSI Gaming Z. So, let’s start at the best all around. The Sapphire Pulse RX 5600 XT 6G GDDR6 14Gbps is the best all-around RX 5600 XT we can think of. It offers a good balance of performance and price compared to the other RX 5600 XT. It features a boost clock speed of 1750MHz and a game clock speed of 1615MHz; and the effective memory speed is of course 14Gbps. It features a dual fan design, Sapphire calls it the Dual-X cooling technology. There are no RGB lighting, but the SAPPHIRE logo on the side has red lighting. Sapphire only has one variant of the RX 5600 XT but it is definitely well made and is one of the best available.

If you want a larger graphics card with 3 fans, then the Gigabyte Radeon RX 5600 XT Gaming OC is your next option. It features a boost clock speed of 1620MHz and a game clock speed of 1560 MHz. This variant may come with a 12Gbps memory speed out of the box. I’m not sure why retailer’s stocks are not updated until now. So, you may need to update its BIOS with the latest one for the 14Gbps memory speed enhancement. Also, note that there is a dual fan WindForce OC variant, but I think the Gaming OC with tri-fan cooler is better. If you don’t want to thinker with the BIOS, since it does come with a potential risk, make sure you are getting the 14Gbps variant (rev 2.0). If you want an Asus graphics card, then the Asus RX 5600 XT TUF Gaming X3 OC should suffice your preference. It features a neutral color theme, with its black and grey lines. There’s a small RGB lighting strip on the front side of the card. This card features a boost clock speed of 1750MHz and a game clock speed of 1615MHz. However, like the Gigabyte Gaming OC, you might get a card with only 12Gbps memory speed out of the box. You’ll also need to update its BIOS if that’s the case. XFX has been updating their graphics cards and they now have a THICC III Pro variant. This card has a boost clock speed of 1750MHz and a game clock speed of 1615MHz. Out of the box, the newer variants have their BIOS updated already and offers 14Gbps of memory speed. XFX’s RX 5600 XT offers an all-black design with a metal backplate; though most part of the cooler shroud is plastic. The Thicc III is a bit pricey, so if you want to save a bit of cash, there is also the XFX RX 5600 XT Thic II Pro variant with dual fans. If you want that “Republic of Gamers”-look in your PC, then the Asus RX 5600 XT Strix Gaming OC is your option. It features Asus’ tested and proven cooling design and ROG aesthetics. It has a boost clock speed of 1750MHz and 1670MHz of game clock speed. However, like the Asus TUF variant, you may need to update the BIOS as well. Most of the Strix Gaming OC I see in retail stores still have the 12Gbps version. The TOP variant should come with 14Gbps out of the box but it is nowhere to be found. Another issue with this specific graphics card is its price. This is one expensive RX 5600 XT at around $330 USD. It’s nearing the price of an RX 5700 8GB already, which by the way is a better option than the 5600 XT. Last but definitely not the least, is the MSI Radeon RX 5600 XT Gaming X. Like the Asus ROG Strix, this is also one of the best RX 5600 XT you can buy. It has a premium look and feel like the Asus ROG Strix; but the color scheme is leaning towards silver with aluminum-brushed finish. And yes, unfortunately, just like the ROG Strix, you may need to update its BIOS via MSI’s Dragon Center. Also, they are priced similarly with the ROG Strix variant. So, if you want a premium card that is not as long or big as the ROG Strix, the MSI RX 5600 XT Gaming X is a good option.

There you have it guys, I hope this article helped you one way or another. It’s not a comprehensive guide since we haven’t tested all the RX 5600 XT. Nevertheless, this will give you an idea which RX 5600 XT is the best or which is the fastest out there. My only real concern is the fact that you may need to flash the BIOS with some variants or models just to “unlock” the faster speeds. If you want to play it safe, better get an RX 5600 XT with 14Gbps memory speed out of the box.