Today we’re checking out another Gen4 SSD designed not only for PC and laptops but for PS5 as well. We have here the XPG GAMMIX S70 Blade from Adata. It’s the company’s latest PCIe Gen4x4 M.2 SSD powered by Innogrit’s IG5236 controller. The S70 Blade offers sequential speeds of up to 7,400MB/s read and up to 6,800 MB/s write. It is available in 512GB, 1TB, and 2TB capacities, and ADATA included a heatsink that works well in desktop PC builds or for PS5. If you are in the market for a Gen4 SSD, please continue reading our XPG Gammix S70 Blade review below.

ADATA uses InnoGrit’s controller on its Gammix S70 Blade SSD, specifically the Rainier IG236 controller. The controller is a 12nm FinFET CMOS process designed for high-end client solutions. It’s a PCIe Gen4 x4, NVMe 1.4 SSD controller that can support capacities up to 8TB. According to InnoGrit’s page, the IG5236 is built with the highest-level security with multiple data encryption and protection schemes; including SM2/3/4 of SCA, AES, SHA, RSA, ECC, CRC, RAID, and end-to-end data protection.

A bright-red glossy box with a rainbow-reflective finish houses the XPG Gammix S70 Blade. The box is a head-turner and will catch the shopper’s attention when displayed on shelves. Some of the features are printed on the front side of the box, while additional specifications can be read on the back.

If you are going to use the included heatsink, don’t forget to remove the protective film underneath the heatsink. Otherwise, the thermal pad would not contact properly on the SSD’s chips. However, I find that the included heatsink is too thin. It may help spread out the heat, but I don’t think it will help keep the temperature at bay, especially during prolonged write sessions.

Since most of the sensitive components on the front side are exposed, do handle the SSD carefully. Meanwhile, at the back, there is a sticker that includes some information about the SSD. Underneath the sticker are two more NAND flash chips and another DRAM cache.

Above you can see a close-up shot of the InnoGrit IG5236 controller. Right next to it is a 1GB DRAM for caching. Looking up the model K4A8G165WC-BCTD on Google reveals that it is a 1GB Samsung DDR4-2666 chip. There are two of these for the 2TB capacity.

There are four NAND flash chips for the 2TB capacity. It’s an ADATA-branded chip. But if I am not mistaken, it’s the newer 176-layer 3D TLC B47R NAND chip from Micron. As you can see from the table below, ADATA claims that the 2TB capacity can reach up to 7,400MB/s in sequential read speed; and up to 6,800MB/s in sequential write speed. Let’s find out if we can achieve those numbers.

I tested the XPG Gammix S70 Blade 2TB capacity on an AMD X570 system, powered by a Ryzen 7 5800X. The drive was installed on the first M.2 slot. It is the slot that is connected to the CPU, and the slot itself is located just below the CPU socket and right above the first PCIe x16 slot. Below are the rest of the system’s specifications:

Note that I didn’t use the included heatsink since it’s very thin. Instead, I used the motherboard’s M.2 heatsink which should provide better cooling. I noticed that without a heatsink, Gen4 SSDs tend to run hot and there is some throttling, especially during a prolonged (write) test. So, if ever you plan on getting a Gen4 SSD that doesn’t come with a heatsink, be sure to utilize the motherboard’s heatsink for the M.2 drives, if available.

In the AJA System Test benchmark, we can see that the X70 Blade is neck-and-neck with the Spatium M480 and Rocket 4 Plus. The Rocket 4 Plus uses a B47R variant of NAND flash as well. But unlike ADATA, Sabrent is using Phison’s E18 controller. As you can see from the graph, InnoGrit’s IG5236 controller can perform on par with Phison’s E18. But this is only for sequential tests, let’s check out more results below. 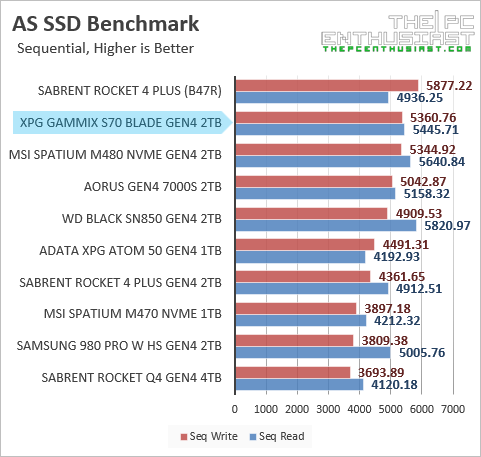 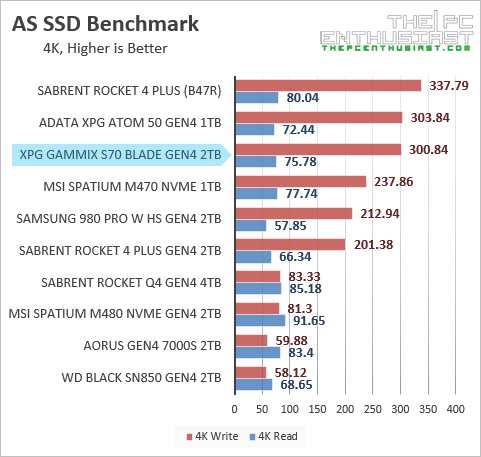 We can see a similar result in AS SSD’s sequential test. The Rocket 4 Plus, S70 Blade and Spatium M480 are on par with each other. Although this time, the Rocket 4 Plus performs slightly faster on the sequential write test.

Surprisingly, during the 4K random test, ADATA’s XPG ATOM performed on par with the S70 Blade. The XPG ATOM is also a Gen4 SSD, but it has a slower sequential speed of up to 5,000MB/s only. It’s a “budget” SSD compared to the S70 Blade. 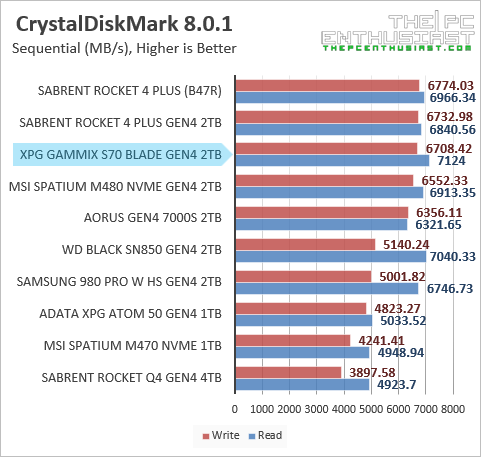 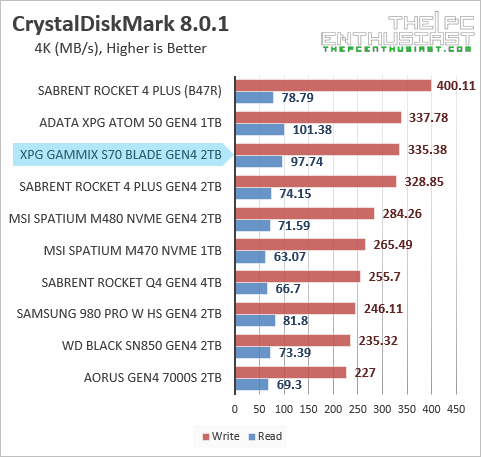 Its 4k random result wasn’t bad either. Just like in AS SSD benchmark, the S70 Blade landed in third place, while the (again) XPG ATOM 50 slightly outperformed it by a couple of MB/s. That’s a good result, considering that it outperformed some of the more popular SSDs, like the Samsung 980 Pro and WD Black SN850, in the 4K random tests.

Finally, I tested the XPG Gammix S70 Blade using the PCMark 10 Full System drive benchmark suite. It is an intensive test and takes about an hour (or more) to finish. The test uses a wide-ranging set of real-world traces from popular applications (Adobe Creative Suite, Microsoft Office), and common tasks to fully test the performance of modern drives.

There are several SSD that didn’t perform well on a single and specific benchmark but performed remarkably overall during the Full System Drive. In this test, the Gammix S70 Blade landed on top of the chart, with a score of 3059 points and a bandwidth speed of 490MB/s. Surprisingly, the Rocket 4 Plus was just performing on average. Even the slower XPG ATOM 50 got a better score which is a bit surprising.

The ADATA XPG Gammix S70 Blade Gen4 M.2 SSD is now available in 512GB, 1TB, and 2TB capacities. It comes with a manufacturer’s suggested retail price of $330 and a 5-year warranty. However, since this drive has been in the market for quite some time, it’s currently selling for around $238 at the time this review was published. For the latest pricing the availability, kindly follow the links below.

It’s been a while since I last tested an SSD from ADATA. So far, the XPG Gammix S70 Blade’s performance wasn’t disappointing and it was able to compete with the top dogs. Although I wasn’t able to achieve the advertised speeds, I was able to reach near-advertised speeds instead. I just hope ADATA will continue to use the same components, no component-switcheroo, until the end of this model’s life.

However, the included heatsink was somewhat disappointing. It was rather thin, I think too thin compared to the competition that came with a heatsink. I think it’s better that the “heatsink” was installed right out of the box, similar to what Sabrent is doing with their Rocket 4 Plus. The top layer of that drive is actually a thin layer of (copper) heat spreader.

If the 2TB S70 Blade’s price was somewhere around the $300 price range at the time of review, I would be a little bit hesitant to recommend it. There are Gen4 SSDs with similar performance that is currently priced below the $300 mark. However, at the time of review, I saw that it’s currently selling for only $237.99, which is (substantially) cheaper than the competition. That’s a great deal if you ask me.

Now, I’m not sure if the price drop is temporary, valid for a limited time or this will be the new retail price. But if ever you spot the XPG Gammix S70 Blade for a similar price, better take advantage of the discounted price. Other companies tend to mark down their SSD prices as well. But currently, I think the S70 Blade offers the better deal.