Last year, we reviewed one of Samsung’s latest 980 PRO M.2 NVMe Gen4 SSD. It was only a 500GB capacity, so the performance was not that stellar. Today, we check out the 980 PRO 2TB capacity, offering slightly faster read and write speeds. In fact, I was waiting for this 2TB version so that I can compare it with WD’s latest Gen4 SSD with the same capacity. Which one do you think will be the fastest Gen4 SSD? Will it be the Samsung 980 PRO or the WD Black SN850? Find out in our Samsung 980 Pro 2TB review/comparison below.

Before we start comparing both drives, allow me to discuss a little bit about the Samsung 980 PRO 2TB capacity first. The Samsung 980 Pro SSD series features a new Elpis controller that can process 128 I/O queues simultaneously. It is about four times that of the previous Phoenix controller used in the 970 Pro and EVO Plus.

The new Samsung Elpis controller was manufactured using an “extremely fine” 8nm process. This is to “satisfy modern needs for high performance without compromising power efficiency”. With the new Elpis controller, the Samsung 980 Pro can reach up to 7,000MB/s sequential speed.

The Elpis controller is paired with Samsung’s 6th Gen V-NAND flash chips. The new V-NAND adds around 40% more cells to the previous 9x-layer single-stack structure. Combining both, the Samsung 980 Pro SSD can deliver up to 7,000MB/s sequential read speed and up to 5,100MB/s sequential write speed. Or up to 1,000K IOPS of random read and write (4KB, QD32 Thread16).

The 980 PRO is a Gen4 SSD, but it is backward compatible with PCIe 3.0 or Gen3 interface. However, expect that speeds will be reduced. Sequential performances are only up to 3500MB/s for reads, and up to 3470MB/s for writes. And Random speeds will only be up to 680K IOPS (2TB) for reads, and 630K IOPS for writes.

Below are a table and diagram comparing the Intelligent TurboWrite (2.0) of the 980 Pro and the 970 EVO Plus. Unfortunately, the diagram only shows up to 1TB capacity. But I assume the 2TB capacity has the same configuration as the 1TB capacity.

One thing to remember about Samsung’s Intelligent TurboWrite feature is that it takes advantage of the drive’s idle capacity. If the SSD does not have more than 324GB of free space for the 1TB model; intelligent TurboWrite will not fully operate. This algorithm does not affect SSD endurance, because the total amount of data users write on the SSD is unchanged.

Samsung has been using a new rectangular packaging with their latest products. If I am not mistaken, I first saw this type of box art and design last year; starting with the 870 QVO SSD.

Samsung hasn’t changed how their M.2 SSDs look. It still sports an all-black design, with a black label and text in white color. The red accent usually denotes Samsung’s PRO series. While the orange is tied to the EVO series and the (light) yellow represents the QVO series.

I did not remove the sticker label, as not to ruin the SSD; but the big silver chip on the right-hand-side is the Elpis controller. Meanwhile, there are only two NAND flash chips, 1TB each, for a total of 2TB capacity. The other side, or underside, is not populated with any chips. Instead, they slapped a copper sheet to serve as a heatsink.

Samsung has implemented three technologies to help with the drive’s temperature. The 980 Pro has a heat spreader (see above); a nickel coating on the Elpis controller; and a fine-tuned controller with advanced Dynamic Thermal Guard (DTG) technology. This is supposed to help the 980 Pro from overheating. But I’d still recommend that you put it under a heatsink; especially if your motherboard has a heatsink cover for the M.2 drives.

The Samsung 980 Pro SSD is a PCIe 4.0 Gen4 SSD; meaning the older generation or system may not support this drive. The only system that currently supports this type of SSD is an AMD X570 or B550 motherboard; powered by (at least) an AMD Ryzen 3000 CPU. Of course, the latest Ryzen Threadripper supports them as well.

Intel’s upcoming Z590 motherboards and some Z490 motherboards paired with the latest 11th Gen Intel Core CPUs will also support Gen4 SSDs. Again, you can install this on a PCIe 3.0 M.2 slot, but the speed will be limited to around 30Gbps. Below are the specifications of the system I used to test the 980 PRO 2TB capacity.

In the AJA System test, we can see that the Samsung 980 Pro 2TB is almost neck and neck with the WD Black SN850 2TB in sequential read. However, it falls behind when it comes to sequential write speed; by around 1,000 MB/s. Both drives are faster than the 1st gen Gen4 SSDs. 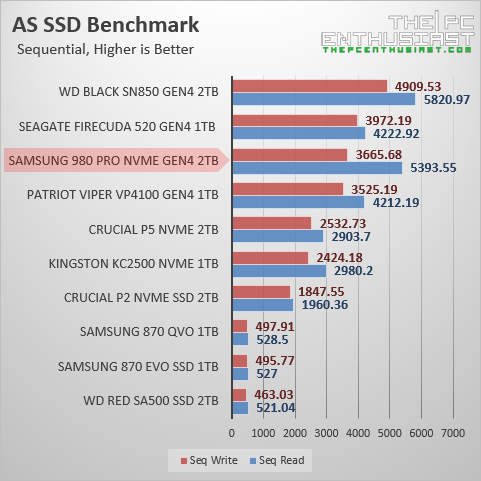 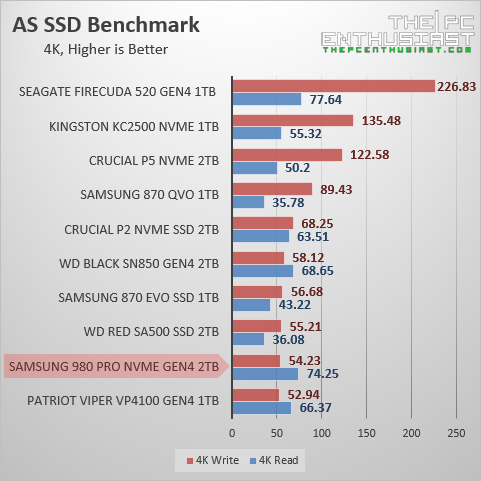 Moving to AS SSD benchmark results, the Samsung 980 Pro 2TB falls behind further in the sequential write test. The Seagate FireCuda 520 1TB outperformed it by a few MB/s in write. While the WD Black SN850 remains on top, both in read and write sequential speeds.

We can see that the Samsung 980 Pro 2TB capacity is behind its advertised speed of 7,000MB/s sequential read and 5,100MB/s sequential write. It is quite uncommon for a Samsung drive to miss or falls short of its advertised speed by a substantial margin. At least based on the Samsung drives I have tested before. Perhaps I should re-do the benchmarks using a Z590 motherboard powered with one of Intel’s newer 11th gen CPUs soon. 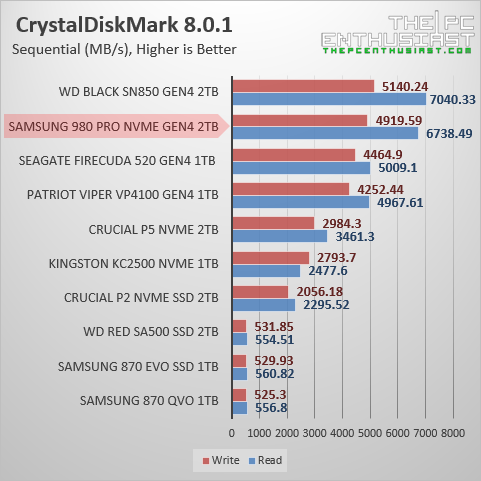 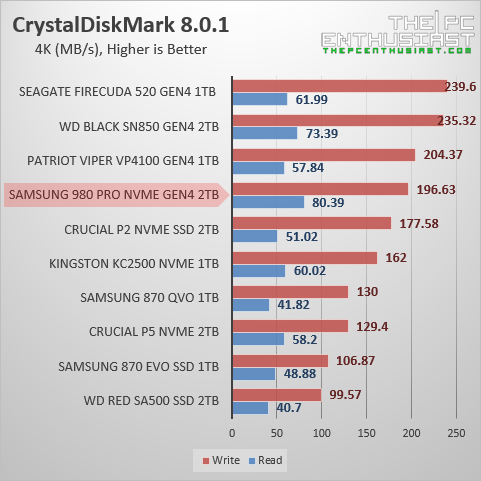 The results that I got in CrystalDiskMark are much closer to the 980 Pro 2TB’s advertised speed. Nevertheless, it still falls behind the WD Black SN850 2TB by a few MB/s. We can also see much better 4K random results using this test. Both the SN850 and 980 Pro are trading blows with the other Gen4 SSDs in this test. 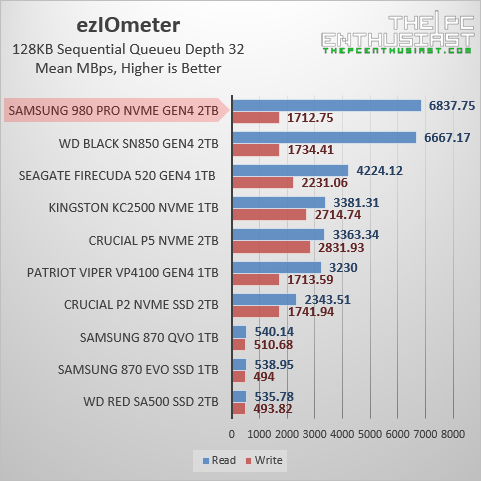 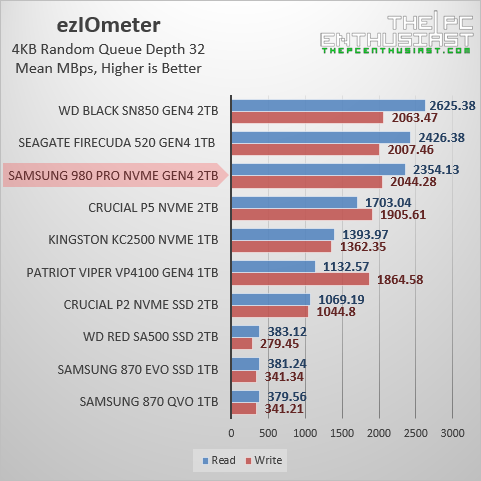 In this test, the Samsung 980 Pro 2TB outperformed the SN850 in the sequential test. However, both newer Gen4 drives performed poorly during the sequential write workloads. Although, it wasn’t the case when it comes to the 4KB random workloads. Both the 980 Pro and SN850 performed well; with a read and write speeds of above 2,000MB/s.

The PCMark 8 Storage test is more intensive and uses a real-world scenario to test the drive. It tests the performance of SSDs, HDDs, and hybrid drives with traces recorded from Adobe Creative Suite, Microsoft Office, and a selection of popular games. It also highlights real-world performance differences between storage devices, unlike synthetic storage tests.

Looking at the results above, this tells us that there’s not a huge difference between all of the Gen4 SSDs. Their storage scores are very close; although the 980 Pro 2TB seems to fall behind when it comes to its storage bandwidth. I ran the benchmark a couple of times, but the results were very similar.

Last but not the least, I tested the Samsung 980 Pro 2TB SSD using PCMark 10’s full system drive. This test uses a wide-ranging set of real-world traces from popular applications and common tasks to fully test the performance of the fastest modern drives. This will give us a more realistic expectation of a drive’s performance and a closer to a real-world testing scenario.

This is the result that I am expecting to see. I think this is more reliable than PCMark 8’s storage test. Unfortunately for the 980 Pro, the WD Black SN850 2TB still came on top. It’s faster by a few points and a few MB/s, but I don’t think that you would notice their performance difference in real-world use and scenario.

Prices of SSD tend to change frequently. So, for the latest pricing and availability, kindly check out the links below.

Both the 980 Pro and SN850 are excellent Gen4 SSDs. You can’t go wrong with any of these drives. However, with a Samsung SSD, you can take advantage of the company’s proprietary software; like the Magician and Data Migration. Samsung’s Magician software is simply well polished and ahead of its competition. WD also has an SSD tool kit, called the WD Dashboard. But WD doesn’t have proprietary migration software.

Samsung also has an advantage when it comes to brand and reputation. For years, Samsung’s SSDs have been leading in the market. And it’s usually the choice of enthusiasts, gamers, and system builders. However, this time, WD was able to outperform Samsung’s top-of-the-line SSD. Although, not by a huge margin.

One thing I would like to note here is that the results would vary depending on the system used. You may get a better or higher score than in our tests. But I don’t think that the difference would be significant enough to outperform WD’s SN850. I am planning to test these drives, again, when I get my hands on a new Z590 motherboard and 11th gen CPU. Let’s see if the results would be any better (or not) on an Intel system.

To be honest, either drive will be fine. Both drives are currently some of the fastest, if not the fastest in the market. They both have a similar life expectancy and warranty period. It boils down to personal preference and which one is cheaper at the time. If you are looking for an M.2 SSD for gaming, these Gen4 SSDs are quite over the top; at least for the current game titles. Any Gen3 or even a SATA SSD would do; as long as the SSD has a good random performance.