With the advancement of SSDs, especially NVMe SSDs, portable SSDs have also improved. Some portable SSDs are around four times faster than the fastest SATA SSDs. You can play games, even AAA-titled games like Cyberpunk 2077, using a portable SSD. Today, we’ll review Western Digital’s latest portable SSD – the WD Black P40 Portable Gaming SSD. Since it has the word “gaming” on it, you can expect this one to have RGB lighting. The WD Black P40 is not really a successor of the P50 but more like a refreshed or redesigned version. If you are looking for a portable SSD as a game drive, file storage, or a mix of both, check out our WD Black P40 review below and find out how it performs.

The WD Black P40 portable “gaming” SSD is the company’s latest storage solution for gamers on the go. It’s supposed to be the P50’s successor, but in terms of performance or technicalities, it is not really a successor. In fact, based on the numbers and reviews of the P50, the P40 is slightly slower than the P50. Maybe that’s why WD named it “P40” and not “P55” or “P60”.

The WD Black P40 offers transfer speeds of up to 2,000MB/s via the USB 3.2 Gen2x2 port. It would be best if you had a USB 3.2 Gen2x2 port to maximize the potential of this drive. Otherwise, it will be limited to the interface’s speed—for example, USB 10Gps or older versions of USB ports.

Unlike most of WD’s SSDs, the P40 doesn’t feature hardware encryption. I wonder if gamers need that feature, mainly if you only use the drive as a game drive. However, WD offers a 5-year limited warranty for the P40.

I don’t have a P50 on hand. So, let’s just briefly compare the difference between the P40 and P50. Basically, the P40 is smaller in size than the P50, and the former has RGB lighting.

The P40 and P50 use USB 3.2 Gen2x2 interface to achieve the 2,000MB/s transfer speed. However, the P50 is slightly faster, just a few hundred MB/s faster than the P40. The difference is unnoticeable in real-life use.

The WD Black P40’s packaging is similar to other WD Black products from the company. It has that all-black color scheme, with orange highlights and some small square pattern that looks like dots for added texture. You can see a photo of the P40 at the front. Meanwhile, some of its features are printed on the backside, including what’s inside the box.

The WD Black P40 has a rugged and industrial look and feel. The drive feels solid on hand, and according to WD, the P40 has a shock-resistant structure and can survive a drop of up to 2 meters high. Nevertheless, it is still a best practice to avoid dropping electronic devices to prevent unwanted issues or physical damage.

The RGB lighting on the P40 gives it a small but nice underglow effect. It would be nice if the RGB lighting strips were longer, but most of the lighting is concentrated on the middle portion.

Flipping the P40, you can see that the LED diffuser is a bit long. However, most of the RGB lighting is only in the middle portion. There are only four RGB LEDs on each side.

The WD Dashboard is optional software. However, you need it for customizing the RGB lighting on the P40 and for firmware updates. If you have another WD storage device like the WD Black SN850X (WD’s fastest Gen4 SSD to date), you can use the same software for firmware updates, maintenance, and monitoring.

In testing the WD Black P40 portable gaming SSD, I am using the Asus ROG Maximus Z690 Hero motherboard powered with a 12th-gen. Intel Core i7-12700K CPU. This motherboard doesn’t have a dedicated 20Gbps USB-C port on its rear I/O panel. So, I installed the SilverStone ECU06 USB 3.2 Type-C Gen2x2 card to test the P40.

The SanDisk Extreme Pro Portable SSD V2 is an older product released in late 2020. At that time, the USB 3.2 Gen2x2 interface was less widely used than today. Motherboards back then didn’t have USB 3.2 20Gbps ports. Even today, not all motherboards have USB 20Gbps ports. 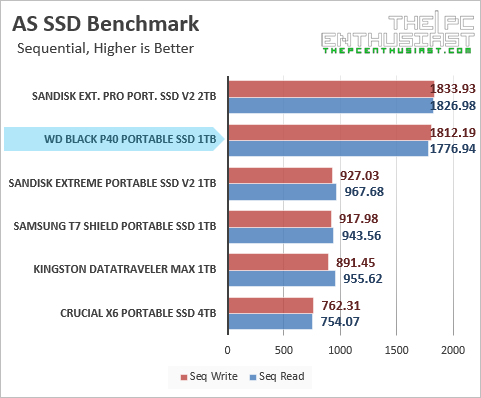 ATTO Disk benchmark reaffirms the P40’s sequential performance. It’s just a few MB/s away from the advertised 2,000MB/s sequential speeds. Both the P40 and Extreme Pro V2 are similar when it comes to sequential read and write speeds. In the CrystalDiskMark sequential test, we can see that the P40 hit the advertised speed. Again, the P40 and Extreme Pro V2 performed similarly during the sequential test. However, the P40 is a bit better when it comes to random workload, especially in random write.

What does it mean if a drive does not perform well in random workloads? Reading and/or writing on the drive simultaneously with different file types (compressed / uncompressed) or executing multiple read and/or write workloads in parallel will take more time to complete. That’s why hard disk drives are very slow in random read/write workloads.

PCMark 10’s Data Drive benchmark is designed to test drives that store files rather than applications. You can also use this test with NAS drives, USB sticks, memory cards, and other external storage devices.

In this test, we can see that the WD Black P40 performed better overall. It even outperformed both the SanDisk Extreme and Extreme Pro V2 SSDs. This may be due to the better random speed of the P40.

Last but not least, I tested the WD Black P40 using the PCMark 10 Full System drive benchmark suite. It is an intensive test and takes about an hour (or more) to finish. The test uses a wide-ranging set of real-world traces from popular applications (Adobe Creative Suite, Microsoft Office), and common tasks to thoroughly test the performance of modern drives.

While the P40 scored better on the Data Drive test, the SanDisk Extreme Pro Portable SSD V2 is still the faster drive overall. However, not by a substantial margin, as the WD Black P40 is just a few MB/s behind it. In real-world use, you may not be able to tell the difference at all.

The WD Black P40 portable gaming SSD is now available and has been in the market for over a couple of months. It comes with a manufacturer’s suggested retail price of $119.99 for the 500GB, $179.99 for 1TB, and $329.99 for the 2TB capacity. WD is also offering a 5-year limited warranty for the said product. When publishing this review, I noticed that the retail price had decreased. For the latest pricing and availability, kindly follow the link below.

The WD Black P40 is a fast portable SSD based on our testing. It has excellent build quality, a slim design, and the RGB lighting is a nice addition. If you don’t like the RGB lighting, you can always turn it off or set it to other colors or effects if you do not want the rainbow preset. While the P40 is shock-resistant, it is not water-proof. Refrain from submerging the P40 under water.

Regarding its performance, the P40 is excellent and reached its advertised speed. However, you should only buy the P40 if your PC has a 20Gbps port. If you have an older system that doesn’t have a USB 20Gbps port, you can get an add-in card, like the ECU06 USB 3.2 Type-C Gen2x2 20Gbps AIC, to enjoy 20Gbps of transfer speed. As for laptop users, the laptop must have a USB 3.2 Gen2x2 20Gbps port. Otherwise, you’ll be limited to whatever USB speed your laptop has.

Currently, Western Digital has three portable SSDs capable of 2,000MB/s transfer speed, as far as I know. You can choose from WD Black P40, the P50, or the SanDisk Extreme Pro Portable SSD V2. These three drives will perform similarly. However, when I published this review, the P40 was the cheapest, followed by the Extreme Pro Portable SSD V2, and the P50 seems to be the more expensive solution among the three.

So, when it comes to cost per capacity, the P40 wins. But, the P40 is only available in 500GB, 1TB, and 2TB capacities. Meanwhile, the P50 and Extreme Pro Portable SSDs have 4TB options. Remember that SSD prices tend to change and can be volatile.

Finally, the WD Black P40 portable gaming SSD is an excellent drive. Since I am testing and benchmarking several systems, I primarily use this as a game drive. I can test and play games from one system to another without copying or downloading the games on each system. I recommend this drive, especially if it fits your needs.