After almost two years, WD finally updated its flagship SSD. Today, we are checking out the WD Black SN850X NVMe SSD. We have the 2TB capacity to test. The SN850X is an updated version of its predecessor, the SN850, that we reviewed a couple of years ago. It features a better and improved 8nm WD proprietary controller. WD improved its flash memory with a 112-layer BICS5 TLC NAND. Performance-wise, it offers speeds of up to 7,300MB/s sequential read speed and up to 6,600MB/s sequential write speed. So, can the improved WD Black SN850X NVMe keep up with the ever-competitive SSD market? Let’s find out in our review below.

You’ll know that WD Black SN850X is an upgrade or improved version of its original. Instead of using a different name, like SN950, WD just put “X” at the end of the SN850. This tell’s us that it’s a refreshed or improved SSD version. It is akin to NVIDIA releasing a “Ti” variant of the RTX 3080 GPU after several months or a year.

Maybe WD didn’t release an “SN950” since that would be the next-generation SSD. And perhaps WD is reserving that name for its PCIe 5.0-based SSD. So, don’t get confused with the naming scheme. The WD Black SN850X is the new and updated version of the SN850 SSD released two years ago.

For the latest pricing and availability: (#ad)
WD Black SN850X NVMe SSD is available on Amazon.com here or Newegg.com here.

WD’s packaging for its flagship SSD didn’t change much. It still has that all-black color scheme, with Orange highlights and White for most of the text. The SN850X’s retail packaging is reminiscent of its non-X variant. There’s also a window at the back of the box where you can see the SSD’s sticker label.

Above are the WD Black SB850X 2 TB’s front and rear views. The chips, covered by a sticker label, are located on the top-front portion of the SSD’s PCB. There’s nothing on the underside of the PCB.

WD doesn’t seem to have any passive cooling solution on the SN850X. There’s no copper heat spreader or aluminum sheet. The sticker label on the front top is just a paper sticker.

When I peeled the sticker label to take photos of the chips, some of the print stuck on the sticker side. That’s why the label on the controller is partially erased. The first chip near the M.2 fingers is a SanDisk-brand 8nm controller labeled 20-82-20035-B2. If you are not updated yet, Western Digital owns SanDisk now. So don’t get surprised to see both brands on the same product.

The SSD’s middle portion is a Micon D9XPG 16Gb DDR4 DRAM module. If I am not mistaken, it is a 2GB memory for cache. Finally, two SanDisk BiCS5 3D TLC NAND flashes are located towards the PCB’s end. I’m not sure why WD opted for a 112-layer NAND flash instead of a 176-layer TLC NAND flash. Maybe WD wanted to use its own NAND flash rather than outsourcing it, which may reduce costs.

When Game Mode 2.0 is activated, three features also get enabled. These are Predictive Loading, Adaptive Thermal Management, and Overhead Balancing. Below are their respective definition according to WD.

I tested the WD Black SN850X 2TB capacity on an Intel Z690 system powered by an Intel Core i7-12700K. I installed the drive on the first M.2 slot. The first M.2 slot, located just below the CPU socket, is connected to the CPU. Below are the rest of the system’s specifications:

Also, I did not enable Game Mode 2.0 when I tested the SSD. I didn’t enable any particular features or functions for the other SSDs I tested in this review. So all drives are set to their “default state,” and we see the raw performance only.

In the AJA System Test benchmark, the WD Black SN850X surpassed Samsung’s latest 990 Pro by a hairline in the sequential read test. The performance difference is negligible, and both drives can be considered on a par in this test. The new SN850X also showed some improvement over its predecessor, the SN850. 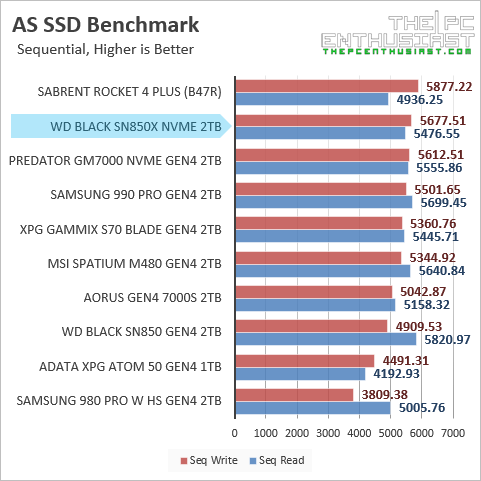 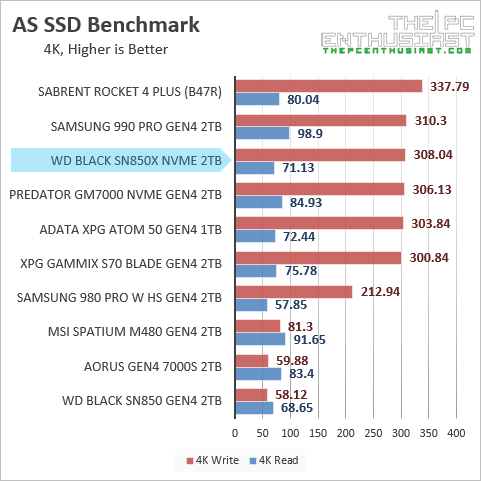 In AS SSD’s sequential benchmark, the SN850X could not outperform the Phison E18-controlled Sabrent Rocket 4 Plus in the sequential write test. But it’s still in the upper place of the chart. The same can be said during the 4k random benchmark, where the SN850X trade blows with the 990 PRO and Predator GM7000. 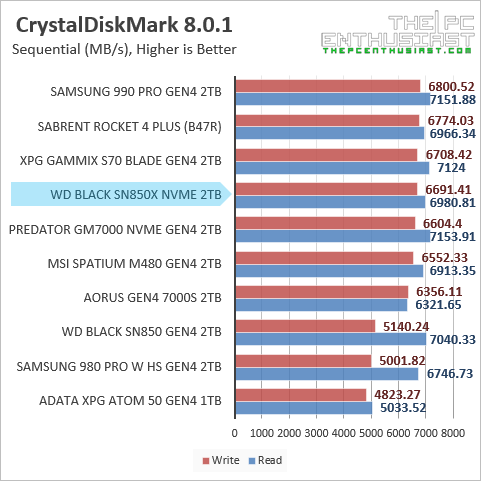 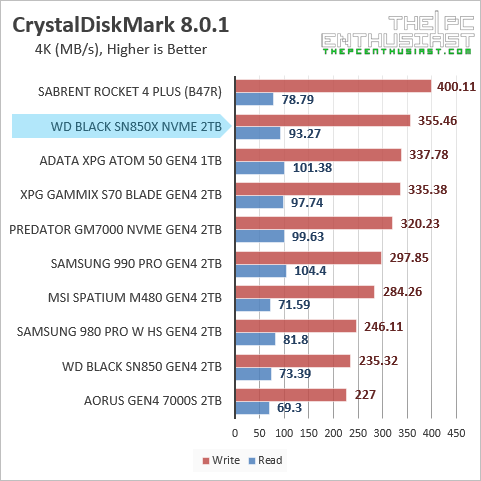 The WD Black SN850X also performed well during the 4k random test in AS SSD. It’s slightly faster on the 4k random read than the Sabrent Rocket 4 Plus. But it fell behind on the 4k random write. Nevertheless, we still see the SN850X on the top portion of the chart, which is good.

If you haven’t noticed yet, its predecessor, the SN850, is usually at the bottom of the chart. It means there is a substantial improvement and performance between the SN850X and SN850.

I wasn’t sure if the SN850X would outperform the Phison E18-based SSDs or the Innogrit ones. But I would be disappointed if it didn’t. Luckily for WD, the SN850X landed second place in this test, just behind Samsung’s 990 PRO.

In my opinion, this is a win for WD, considering that it can finally compete and sometimes outperform the Phison and Innogrit-based SSDs in the market. After (almost) two years, WD is again neck and neck with Samsung when it comes to their flagship SSDs.

The PCMark 10 Full system drive test also shows the drive’s average access time. I included the benchmark results this time. The SN850X got an average access time of 47μs, just 1μs behind the 990 Pro. That’s basically negligible and is considered on par.

The WD Black SN850X NVMe SSD has been available in the market for several weeks/months already. It came with an original MSRP of $159.99 for the 1TB capacity, $289.99 for the 2TB capacity, and $699.99 for the 4TB capacity. The SN850X Heatsink variant is $20 more than the non-heatsink version, but a 4TB with the heatsink is not available. When it comes to warranty, WD is offering a 5-year warranty for the said SSD. However, when I published this review, the prices had gone down already. For the latest pricing and availability, kindly follow the links below.

For the latest pricing and availability:
WD Black SN850X NVMe SSD is available on Amazon.com here or Newegg.com here.

For almost two years, WD was behind the competition regarding SSD performance. The WD SN850 struggled to compete with the Phison-based and Innogrit-based SSDs on the market. Not only did the competition have a better and faster controller, but they were already using a 176-layer 3D TLC.

With the release of the new SN850X, WD has regained its top position and crown. Although not a clear win, since it trades blow with Samsung’s new 990 PRO SSD. Performance-wise, the SN850X is one of the fastest SSDs in the market, as you have seen from the benchmark results above.

While the SN850X could not outperform the 990 Pro in performance, the SN850X beats the 990 Pro in today’s pricing. The 2TB 990 Pro comes with an MSRP of $289.99, similar to SN850X’s launch price. However, since the SN850X has been on the market for several weeks, its current price has also decreased. The 2TB SN850X currently retails for around $229.99 only. Not to mention, Samsung’s 990 Pro isn’t available yet. It will start selling in November. So WD has the starting advantage here.

I don’t have anything to say or report negatively about WD’s SN850X. Well, it doesn’t have hardware-based encryption, unlike the competition. But similar to Samsung, WD has a good track record regarding its SSD’s quality. I don’t have the heatsink variant, but I think it looks pleasing with its industrial-rugged design. The WD SN850X is not only compatible with PC, but it also works with PlayStation 5.

Overall, the WD Black SN850X NVMe SSD is one of the fastest in the market. You can’t go wrong with this drive, especially if you spot one for a good deal.