Almost a couple of months ago, Samsung announced its new flagship SSD, the Samsung 990 PRO PCIe 4.0 NVMe M.2 SSD series. Today, we are finally able to share with you, not only its features and specs but also its performance as well. If you have read our Gen4 SSDs, you might notice that Samsung hasn’t been on top of the charts. The 980 PRO is a great solid drive, but it has been outperformed by many SSDs in the market for quite some time already. Its major competitors are powered by Phison E18 and Innogrit IG5236 controllers. So, with the latest 990 PRO powered by Samsung’s new Pascal controller paired with 7th gen V-NAND technology, can Samsung compete with the fastest Gen4 SSDs in the market? Let’s find out in our Samsung 980 PRO 2TB SSD review below.

Performance-wise, the 990 PRO series offers sequential read and write speeds of up to 7,450 MB/s and 6,900 MB/s, respectively. It also delivers up to 1,400K IOPS random read speeds and up to 1,550K IOPS random write speeds. According to Samsung, the new 990 PRO offers up to a 55% improvement in random performance over the 980 PRO.

Built for Gaming and Productivity

The 990 PRO is optimized for the Microsoft DirectStorage API. When tested with Forspoken1), Luminous Productions’ forthcoming action role-playing game supporting DirectStorage technology, the map loading time of the 990 PRO was about one second, compared to four seconds for a SATA SSD and 28 seconds for a hard disk drive.

This was achieved thanks to Samsung’s new in-house Pascal Controller. It optimizes the data path from NAND through hardware automation technology and reduces processing time through cache algorithm. Also, the 990 PRO achieves random performance up to 1,550K IOPS, which reduces loading times dramatically. It is also optimized for graphically demanding content such as 3D rendering, 4K video editing, and data analysis.

Thanks to the newly designed Pascal controller, the 990 PRO is built on a low-power architecture and improves the SSD’s power efficiency by up to 50% compared to its predecessor the 980 PRO, according to Samsung.

The 990 PRO SSD series has a nickel coating on the controller and a heat spreader label on the drive for reliable thermal management. Samsung’s Dynamic Thermal Guard technology further ensures that the drive’s temperature stays in the optimal range.

Just like the 980 PRO, the new 990 PRO is also available with a Heatsink variant. Although, this time, the Heatsink has a more aggressive design and has a small RGB lighting in the middle.

The 990 PRO with Heatsink SSD comes with a slim heatsink offering an additional layer of thermal control while its RGB lights add more style to the drive. Using Samsung Magician Software, users can customize the lights to harmonize with other LED gaming components in their gaming setup. With its 8.2mm slim body, the Samsung 990 PRO with Heatsink meets the PCI-SIG D8 standards to be compatible with desktops, consoles, and laptops.

For the latest pricing and availability: (#ad)
The Samsung 990 Pro SSD Series is available at Amazon.com here or Newegg.com here.

The Samsung 990 PRO SSD series has a new retail box design. On the older 980 PRO, it was just a white box with Blue highlights; maybe to match the PS5’s color scheme. Although the design or box art is new, the way the product and the information about the SSD are presented is similar to the previous SSD packaging. Inside the box, you get the SSD itself and some reading material.

The Samsung 990 PRO SSD looks very similar to its predecessor. I believe Samsung doesn’t really need to change how it looks. It works and with one glance, you can tell that it’s a Samsung SSD. If you have a 980 PRO without the heatsink, it looks almost identical.

It has a one-sided design, meaning all the chips are on the top front side. The Pascal controller is near the M.2 fingers, followed by the DRAM in the middle, and finally the two 7th gen V-NAND chips towards the end. Just like in the 980 PRO, there is a thin copper sheet or layer on the opposite side of the PCB, right under the NAND chips.

I tested the Samsung 990 PRO 2TB capacity on an Intel Z690 system, powered by an Intel Core i7-12700K. The drive was installed on the first M.2 slot. It is the slot that is connected to the CPU, and the slot itself is located just below the CPU socket and right above the first PCIe x16 slot. Below are the rest of the system’s specifications:

In the AJA System Test benchmark, the Samsung 990 PRO is just a hairline faster than the Phison E18-controlled Sabrent Rocket 4 Plus. It’s also faster than the Innogrit IG5236-controlled Predator GM7000 and Gammix S70 Blade Gen4 SSDs. So far it is a good start for the 990 PRO.

Also, as you can see from the chart, its predecessor, the 980 PRO is almost at the bottom of the chart. Samsung clearly improved its new SSD to better compete in the market. In AS SSD’s sequential benchmark, the 990 PRO 2TB didn’t land on the top of the chart. It’s trading blows with the other SSDs. The same can be said during the 4k random benchmark. Looks like it’s not a huge win for the 990 PRO in this test. Nevertheless, I’m glad to see Samsung (finally) able to compete with the other top-performing SSDS in the market.

ATTO Disk benchmark is purely a sequential test and I was expecting that it would hit the 7,450MB/s mark with this benchmark test. However, I only got around 6,650MB/s sequential read and around 6,370MB/s sequential write. To be fair, non of the drives reached their advertised speeds in this test. 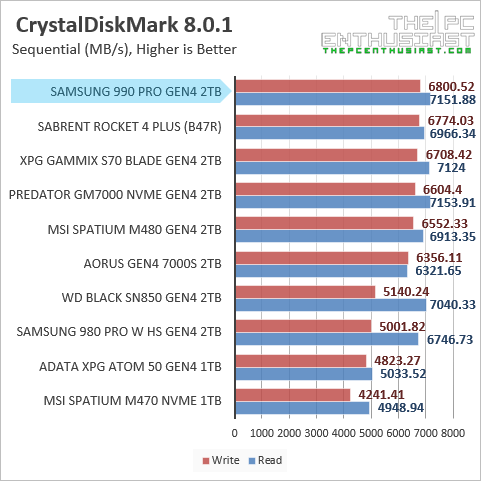 Unlike in AS SSD 4K random tests, the Samsung 990 PRO didn’t perform well in the 4k random test. While its random write speed only reached around 298MB/s in this test, its random read speed reach around 104MB/s, which is faster than any drive on the chart. The drives were arranged according to the write speeds. But if I arranged it according to the read speed, the 990 PRO would end up on the top.

Finally, I tested the Samsung 990 PRO 2TB SSD using the PCMark 10 Full System drive benchmark suite. It is an intensive test and takes about an hour (or more) to finish. The test uses a wide-ranging set of real-world traces from popular applications (Adobe Creative Suite, Microsoft Office), and common tasks to fully test the performance of modern drives.

To be honest, I would be disappointed if Samsung didn’t make it on top or perhaps in second place in this test. Fortunately, my 990 PRO got a grand score of 3602 points in PCMark 10’s full system drive. That’s more than 400 points than the Predator GM7000 Gen4 SSD. Its bandwidth was also high, at 569MB/s. Overall, the 990 PRO performed remarkably well.

The Samsung 990 PRO series will be available to pre-order starting November 1 on Samsung.com. It comes with a manufacturer’s suggested retail price of $169.99 for 1TB and $289.99 for the 2TB capacity. Meanwhile, the 990 PRO with Heatsink version is just $20 more than the no Heatsink variant. A 4TB variant will be available in 2023. Samsung is also offering a 5-year limited warranty for the 990 PRO series. For the latest pricing and availability, kindly follow the links below. (#ad)

The Samsung 990 Pro SSD Series is available at Amazon.com here or Newegg.com here.

For years, Samsung wasn’t competing well in the SSD market. And by that, I specifically mean in terms of performance. Just look at how the competition outperforms the 980 PRO. Compared to the competition the performance of the 980 Pro doesn’t look Pro at all.

I don’t have anything to say or report negatively about the 990 Pro. Samsung has a really good track record when it comes to its SSD quality. Samsung’s proprietary Magician software is also one of the best, if not the best in the industry. Aesthetically speaking, the design of Samsung’s SSD looks premium and goes well with any build. The 990 Pro Heatsink variant may look a bit aggressive though.

Since the 990 Pro is a new product, expect its pricing to be on the high side. Currently, the 980 Pro 2TB SSD retails for around $220 for the 2TB capacity. Meanwhile, the 2TB capacity of the 990 Pro has an MSRP of $290. Its competition is currently priced at around $200 to $220 only. Price-wise, it may not look good for the 990 Pro. However, SSD prices tend to drop. Just wait a few months and I’m positive that you’ll see the 990 Pro at a more attractive price.

At the end of the day, the Samsung 990 Pro SSD series is one of the fastest SSD in the market. It has a good set of features, it’s aesthetically pleasing, and you get access to a well-polished software. Just buy it! Especially if you see it at a more competitive price.