Today, let’s review the Predator GM7000 PCIe Gen 4.0 NVMe SSD. We have the 2TB capacity here to test. The GM7000 boasts speeds of up to 7,4000MB/s in sequential read and up to 6,700MB/s in sequential write. It uses Innogrit’s 12nm flagship 8-channel IG5236 controller, and it features a custom-made Graphene-laced foam pad for cooling. Check out how the Predator GM7000 performs in our review below.

Going back to the Predator GM7000, this Gen4 SSD features the following:

The Predator GM7000 PCIe Gen4 x4 M.2 SSD is housed inside a small black box. You can see a photo of the SSD at the front, as well as its capacity. Oddly, the packaging didn’t highlight the Graphene-laced foam pad at the front. Printed at the back are the disclaimer and the GM7000’s specifications.

Above you can see the front and rear views of the Predator GM7000 SSD. The top-front portion is a simple “Predator” logo, while on the bottom rear is a sticker label containing some information about the SSD. The 2TB capacity has both sides populated with chips.

At the top front, there are two 176-Layer Micron TLC NAND chips, then the Innogrit IG5236 and a NANYA DRAM module located near the M.2 fingers. Meanwhile, at the bottom/rear side are two more NAND chips and another DRAM module. The four NAND chips result in a 2TB capacity and the two DRAM modules account for a total of 2GB of cache.

Looking from the sides of the GM7000 Gen4 SSD, you can see the Graphene-laced foam padding. I have seen a Graphene-based heat spreader and the Graphene backplate on the MSI RTX 3060 Gaming X Trio and RTX 3070 Gaming X Trio. But this is the first time I encountered a “Graphene-laced” foam padding used for cooling. On top of the foam pad is a thin aluminum plate with the Predator logo on it.

I did not remove the foam pad on my GM7000 since I didn’t want to ruin it. I still need the drive in its pristine form for future testing and benchmarks. However, if you are curious, above is a photo of the Innogrit IG5236 controller. That’s exactly the chip used on the GM7000. Now let’s see how this Gen4 SSD performs.

I tested the Predator GM7000 PCIe 4.0 SSD 2TB capacity on an Intel Z690 system, powered by an Intel Core i7-12700K. The drive was installed on the first M.2 slot. It is the slot that is connected to the CPU, and the slot itself is located just below the CPU socket and right above the first PCIe x16 slot. Below are the rest of the system’s specifications:

Note that I didn’t use the motherboard’s heatsink for the M.2 drives. As mentioned, I did not remove the GM7000’s Graphene-laced foam pad, which serves as its cooling solution.

In the AJA System Test benchmark, we can see that the Predator GM7000 is neck-and-neck with the Spatium M480, Rocket 4 Plus, and the Gammix S70 Blade. Once again, the GM7000 proved that InnoGrit’s IG5236 controller can perform on par with Phison’s E18, which is a popular controller. But this is only for sequential tests, let’s check out more results below. 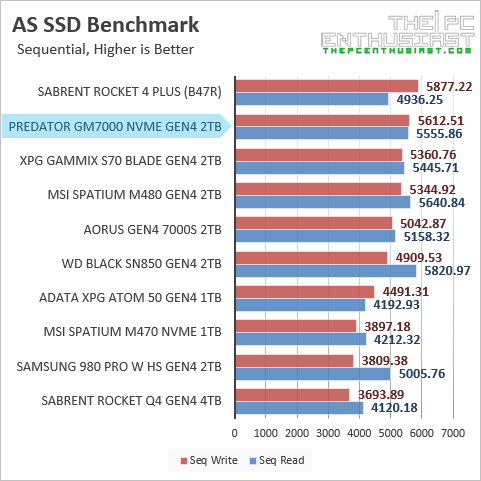 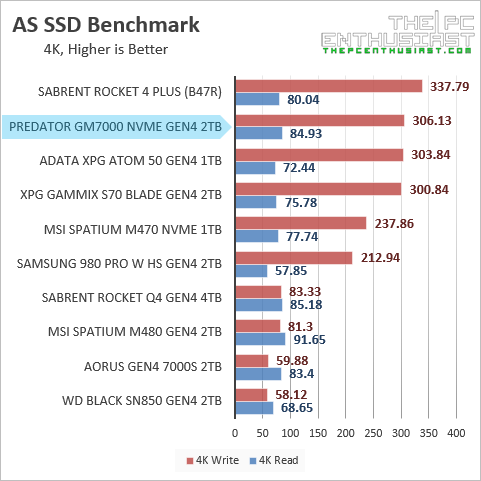 In AS SSD’s sequential benchmark, the results are quite similar. The GM7000, S70 Blade, and Spatium M480 are on par with each other. Although this time, the Rocket 4 Plus performed slightly faster on the sequential write test. But it fell short on the sequential read test.

During the 4K random tests, the GM7000 is just a hairline faster than the XPG Gammix S70 Blade. Surprisingly, the budget-friendly XPG ATOM performed on par with the faster S70 Blade on this 4K random test. Sabrent’s Rocket 4 Plus is still slightly ahead, but the performance difference is minuscule. 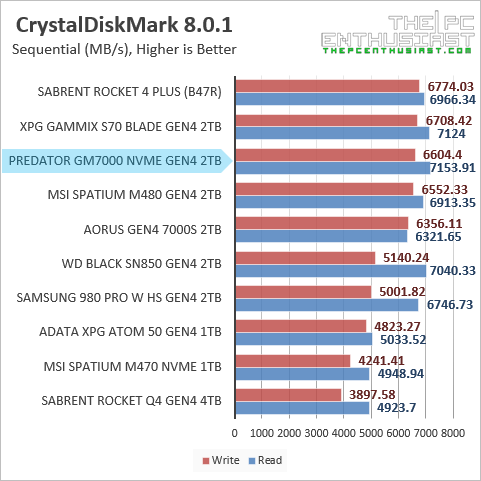 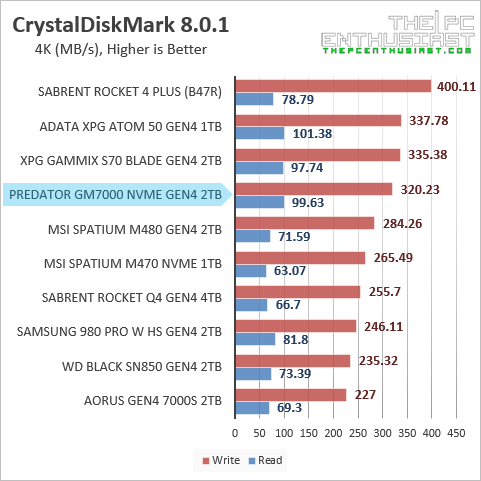 Similar to what I got in AS SSD 4K random benchmarks, the GM7000 performed similarly to the Gammix S70 Blade. Although this time, it performed a hairline slower. The result is still overall good, considering that it outperformed some of the more popular SSDs, like the Samsung 980 Pro and WD Black SN850, in the 4K random tests.

Finally, I tested BIWIN Tech’s Predator GM7000 Gen4 SSD using the PCMark 10 Full System drive benchmark suite. It is an intensive test and takes about an hour (or more) to finish. The test uses a wide-ranging set of real-world traces from popular applications (Adobe Creative Suite, Microsoft Office), and common tasks to fully test the performance of modern drives.

There are several SSD that didn’t perform well on a single and specific benchmark but performed remarkably overall during the Full System Drive. In this test, the Predator GM7000 landed on top of the chart, with a score of 3171 points and a bandwidth speed of 508MB/s. It outperformed the XPG Gammix S70 Blade which is also powered by the same Innogrit IG5236 controller. To be honest, I wasn’t expecting that it would land on top of the chart, considering the other benchmark results that I got.

The Predator GM7000 PCIe 4.0 NVMe SSD has been in the market for quite some time now. So, I am not sure what was the original MSRP or launch price of the said SSD. However, at the time I published this review, the 512GB retails for $70; 1TB for $110; and 2TB capacity for $220. BIWIN Storage Technology is also offering up to 5 years of warranty for the said product. For the latest pricing and availability, kindly follow the link below.

This is the first time I tested a product from BIWIN Storage Technology. And their Predator GM7000 didn’t disappoint when it comes to performance. Although I haven’t tested and recorded its temperature behavior, it (surprisingly) landed on top in PCMark 10’s Full System Drive benchmark. That test alone is intensive and will write around 204GB of data and it typically takes an hour to finish. I guess the “Graphene-laced” foam pad works and helps prevent thermal throttling.

Anyway, it was only in CrystalDiskMark that the GM7000 reached near-advertised speeds. I’m not expecting that it would hit the advertised speed in every test and benchmark. And it’s the same case for the other SSDs from different manufacturers as well. Nevertheless, it did perform quite well and as expected.

The ADATA XPG Gammix S70 Blade is the closest to the GM7000 since it uses the same controller and the configuration or specs are almost similar. Luckily for the GM7000, it was able to outperform the S70 Blade, although not by a huge margin.

However, at the time this review was published, the Gammix S70 Blade is slightly cheaper than the GM7000. That makes the S70 Blade more attractive than the GM7000 price-wise. If BIWIN Tech can somehow lower the price or match ADATA’s pricing, it would be an easy win for the GM7000.

Looking at the SSD market on a larger scale, it’s very crowded and the competition is stiff. When it comes to performance, there is no doubt that the Predator GM7000 can compete and even outperform some of the top brands. However, consumers usually go for cheaper or better-priced products. And this is one area where, I think, BIWIN Tech needs to improve to compete better.

At the end of the day, the Predator GM7000 PCIe Gen4 2TB M.2 SSD is a fast storage drive. It’s great for OS drive, gaming, or as an active drive for photo or video editing and production. If you spot the Predator GM7000 with a good deal, I don’t have any issues recommending it at all.