AMD is finally back in the GPU game and competes in the mid-range graphics card market. The company released their latest Radeon RX 5700 Series NAVI-based GPUs mid this year; featuring AMD’s latest RDNA architecture in 7nm process. When the early reviews of the RX 5700 XT went out, many were impressed or satisfied with the performance since it was basically faster than the RTX 2060 Super in the same price range. However, consumers were also discouraged from buying the reference blower design due to heat and noise issue. Frankly, we’d also not recommend buying a reference graphics card with blower cooler design; not unless you really need a blower type cooler in your system. So, after a few months later, AMD’s partners have already released their custom designed RX 5700 XT; with a much better cooler design, better aesthetics and runs silently as well. If you are in the market for a Radeon RX 5700 XT, we listed here the best Radeon RX 5700 XT graphics cards released. Check out our list and pick one that satisfies your preference the most. 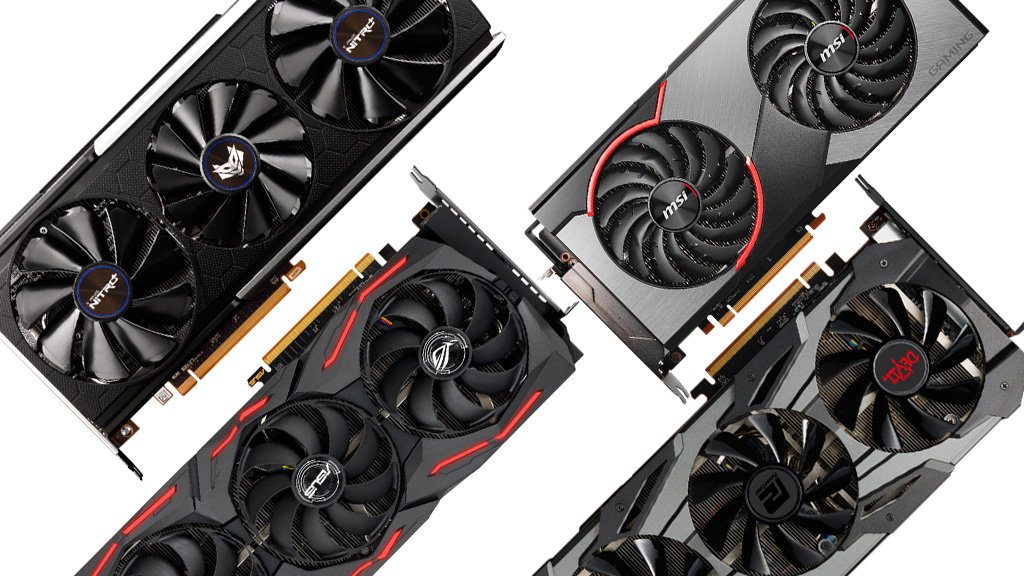 In this article, I will not go into details regarding the Radeon RX 5700 series graphics card. By now there are a ton of materials and sources around the web. We have also reviewed an RX 5700 XT in case you want to see how it performs in general. Most RX 5700 XTs tend to perform similarly. They just differ by a few frames, give or take. But generally speaking, all RX 5700 XT regardless of the design or price, will perform similarly. After all, they are all built with the same GPUs inside. The main difference would be their aesthetics, cooling performance, acoustics and price.

Radeon RX 5700 XT in a Gist
In case you don’t want to click away, here’s a gist of what to expect from an RX 5700 XT. The AMD Radeon RX 5700 XT features 40 compute units, 2560 stream processors, 64 ROPs, 160 Texture units and a transistor count of 10.3 billion. The reference design has a base frequency of 1605MHz with a boost frequency of up to 1905MHz. It has a peak half precision compute performance of 19.51 TFLOPs and a peak single precision compute performance of 9.75 TFLOPs. The 7nm GPU is paired with 8GB of GDDR6 memory with an effective speed of 14Gps, a memory bandwidth of 448 BG/s and a memory interface of 256-bit. It has a typical board power of 225W and requires at least a 600W power supply.

Why Not Choose the Radeon RX 5700 XT?
Despite on 7nm fabrication process, the Radeon RX 5700 XT is not that efficient compared to the competition. It draws more power and produces more heat. That’s why if ever you are planning on getting one, stick with one of the best RX 5700 XT graphics cards offering a much better cooling solution and aesthetics than the reference design. Some of you might not be too concerned about the GPU’s power draw or power consumption, but there are consumers who are conscious when it comes to power efficiency.

Also, the RX 5700 XT or any of AMD’s GPUs doesn’t feature and support real time ray tracing; unlike NVIDIA’s RTX graphics card. If ever you plan to play some games with real-time ray tracing to enhance you gaming experience, you might want to check out the best of what NVIDIA has to offer.

What Monitor is Best for the RX 5700 XT?
The Radeon RX 5700 XT is basically a graphics card designed for 1440p gaming. Depending on the title of the game you are playing or how graphics intensive it is; the RX 5700 XT is great for 1080p, 1080p high refresh rate and 1440p gaming. If you are using a 1440p high refresh rate monitor, you might want to tone down some graphics settings to enjoy the full potential of 144Hz especially if that game is (very) graphics intensive at ultra or maximum graphics quality. The RX 5700 series graphics cards are not designed for 4K gaming at all. Better use a much faster graphics card for 4K gaming.

Now going back to the main topic, below are our top pick best Radeon RX 5700 XT graphics cards. You simply can’t go wrong with any of these. Their performance will be very close or similar and it will come down to aesthetics and price as your major deciding factor.

First on our list is the Sapphire Nitro+ RX 5700 XT. This is definitely one of the best if not the best RX 5700 XT that was recently released. This is a custom designed graphics card with custom PCB and carefully selected components. If offers a boost clock speed of up to 2010MHz, game clock of 1905MHz and a base clock of 1770MHz. It features Sapphire’s CoolTech technology offering superior fan control, robust VRM and memory cooling and Tri-X cooling for the GPU. It has a tri-fan design with stylish cooler design and back plate. There’s also an RGB lighting on the logo and on the side to give the graphics card some eye candy. As a cheaper alternative, Sapphire also has the Pulse RX 5700 XT. It’s a dual fan graphics card, also has a good cooling performance; but it’s definitely less attractive than the Nitro+.

Up next is from MSI, the Radeon RX 5700 XT Gaming X. MSI’s Gaming X series usually has the best graphics card design from the company. However, the RX 5700 XT Gaming X has a new and refreshing aesthetics, unlike the GeForce Gaming X variants. Nevertheless, it still features the company’s Twin Frozr 7 Thermal design, a very impressive cooling solution as we have seen on our MSI RTX 2070 Super review. The aesthetics is also simple, yet looks very nice. It has a black and aluminum-brush finish; RGB lighting is also very minimal as well, only on the dragon logo. Clock speeds are not as aggressive compared to the Nitro+. It has up to 1980 MHz, 1870 MHz, and 1730 MHz of boost, game and base clocks respectively. Unfortunately, I can’t find this graphics card for sale yet (at the time of writing). I’ll update this soon. MSI also has the RX 5700 XT EVOKE OC that we reviewed before. However, it’s runs a bit louder and memory temperature is a bit too high. The MSI RX 5700 XT MECH OH would probably be the better choice if it had the same cooling performance as the RTX Ventus OC.

One of the most hyped RX 5700 XT is the PowerColor RX 5700 XT Red Devil. It features three 90mm fans and the front cooler shroud has an aggressive design. It also features a dual BIOS for switching to silent mode. There is an RGB lighting, but only in the logo on the side and logo on the back plate. PowerColor is also using DrMOS components, 10phase PWM and super capacitors. However, like the MSI Gaming X, it’s also very hard or nowhere to be found in retail stores. Availability is very scarce at the moment. As an alternative, PowerColor has the RX 5700 XT Red Dragon with dual fan cooling solution. It’s somewhat similar to Sapphire’s Pulse variant but has a more plain-looking aesthetics with an all-black design.

Gigabyte hasn’t released an Aorus version of the RX 5700 XT; it would be nice if they did. But they released the Gigabyte Radeon RX 5700 XT Gaming OC. It features Gigabyte’s Windforce 3X cooling system, a tested and proven cooling solution. The graphics card itself looks very similar or exactly the same with an RTX 2070S or RTX 2080S Gaming OC that has the same cooling shroud. We have also tested Gigabyte’s RTX 2070 Super Gaming OC and I’m quite impressed on how cool and quite the graphics card run. No doubt that the RX 5700 XT Gaming OC would offer the same cool and quite operation as well. RGB lighting is also minimal and it’s limited to the Gigabyte logo on the side of the card. Its clock speeds are not the highest, but it offers up to 1905MHz of boost clock, 1795MHz of game clock and 1650MHz of base clock speed. Another best RX 5700 XT graphics card on the market is from Asus – the Republic of Gamers RX 5700 XT Strix OC. This graphics card’s design probably doesn’t need any introduction at all. We have seen the ROG Strix OC design on the market for quite some time now. It’s the same cooler design used in most of the GeForce RTX 20 series Strix variant; featuring Axial-tech fans, Super Alloy Power II, 0dB technology, reinforced frame, 2.7-slot design, Aura Sync and many more. No doubt that the ROG Strix’s cooling solution can keep the RX 5700 XT temperature’s at bay. It also has a high clock speeds – up to 2035MHz boost, 1965MHz game and 1840MHz base when in OC mode. The only issue with this graphics card is that it’s probably the most expensive in this list. And price is dangerously nearing or the same as the RTX 2070 Super Founders Edition, which is an overall faster graphics card. Asus also has the TUF Gaming X3 RX 5700 XT OC. It also features a tri-fan design but with a more rugged TUF Gaming aesthetics. It’s expected to be cheaper than the ROG Strix variant, but at this time availability is the issue with the TUF Gaming X3 variant.

There you have it guys! These are currently the best Radeon RX 5700 XT custom designed graphics cards on the market. Many gamers are already itching to buy an RX 5700 XT, the problem is the availability and stock. It’s very limited at this time and I hope it would improve very soon. AMD has a good graphics card here, but the low to no availability is killing the excitement.

I hope this article helped you in one way or another in choosing which Radeon RX 5700 XT is the best for you. Please don’t forget to share this article with your friends.